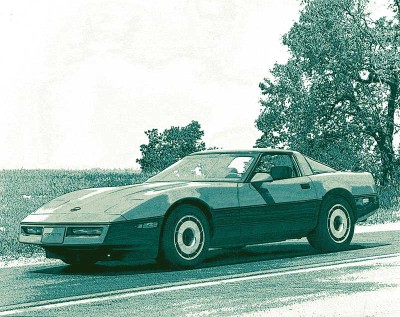 Styling was unchanged on the sophomore '85 save "Tuned Port Injection" badges on the front fenders.See more classic car pictures.

The C4 arrived at about the time the U.S. economy began recovering from its early-Eighties doldrums. What had been an oil shortage was unexpectedly replaced by an oil glut that caused gas prices to plunge, and buyers soon shopped for big and powerful Detroit cars once again. The Reagan Administration had also been helping out, convincing Japanese automakers to voluntarily limit their car exports to the U.S. via the Voluntary Restraint Agreement (VRA). In this new, more hospitable climate, American performance was flourishing anew by mid-decade, and Chevy wasted no time in turning up the Corvette's volume.

Thus, the 1985 Corvette received a new "Tuned Port Injection" system, which was basically the German Bosch fuel-injection system with a revised intake manifold. Although the time-honored Corvette small-block still measured 350 cubes, the substitution of the new multi-port fuel-injection with tuned intake runners, along with a half-point compression increase to 9.5:1, lifted output by 25 horses, to reach 230 bhp at 4,000 rpm; torque improved by 40 lbs/ft, going from 290 at 2,800 rpm to a meaty 330 lbs/ft at 3,200. So extensive were the changes that Chevy was moved to use a new engine designation: L98.

Responding to all the complaints about the corvette's harsh ride, Chevy softened up both spring and shock rates on both the standard and performance Z51 suspensions for '85. The latter now came with larger-diameter fore and aft stabilizer bars to maintain total roll stiffness with the softer calibrations, plus 9.5-inch-wide wheels at the front as well as the rear. Also included were Delco-Bilstein gas-pressurized shocks -- available as a separate option with the base suspension -- and a revised heavy-duty cooling system.

Of course, engineers were still interested in handling. The Z51 package was fine-tuned by Corvette development engineer John Heinricy to be a "showroom stock GT car," according to Corvette chief engineer David R. McLellan, referring to a hotly contested class in SCCA racing. Intriguingly, the suspension changes lowered ride height on the 1985 Corvette by an imperceptible 3/4 inch, which was just enough to drop the drag coefficient to 0.33 and, with the 3.07:1 axle, raise top speed to a genuine 150 mph. This year's standard axle was an even taller 2.73:1, which proved to be too tall for the car to reach 150 mph.

For better straight-line stability at top speeds, the steering caster angle was increased one degree (to four). For better stopping ability from high speeds, the brake system was fortified with a larger master cylinder and booster, as well as different pads imparting more braking power and improved feel. 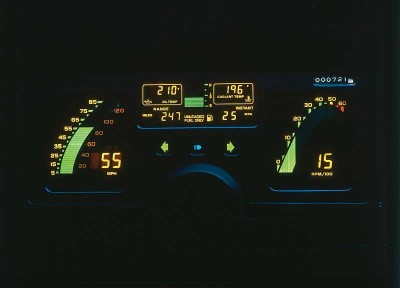 The 1985 Corvette arrived with this dazzling array of digital and graphic instruments. Some critics thought the ensemble rather too busy, though.

Transmission-wise, the 4+3 Overdrive manual received a heavy-duty 8.5-inch differential ring gear (up from 7.9 inches) for extra longevity, as well as an override button that was more conveniently placed atop the shift knob. What's more, the unit's computer was reprogrammed to make the overdrive function less intrusive. Toward the same end, the electronics governing the lockup torque converter clutch in the automatic transmission were also revised.

Cosmetic and convenience improvements on the 1985 Corvette included revised instrument graphics for improved legibility and newly optional leather upholstery for the extra-cost Lear-Siegler seats. Finally, Chevy began eliminating the sources of the rattles and squeaks that had so plagued the car in its first year via an extensive series of minor structural changes.

Car and Driver was among the media celebrating the new model's added refinement. The magazine sampled two cars -- an automatic with the base suspension and a Z51 manual -- and found both to be "tight and solid." The former ran 0-60 mph in 5.7 seconds and the standing quarter-mile in 14.1 seconds at 97 mph. The manual version raced to 60 mph in six seconds flat and hit the quarter-mile in 14.4 seconds at 95 mph, reaching a top speed of 150 mph.

Roadholding and braking characteristics for the 1985 Corvette were also praised in the media, though testers still groused about an unnecessarily harsh ride with steering that was judged as being too quick for around-town use. The digital dashboard continued to be dismissed as being excessively gimmicky. 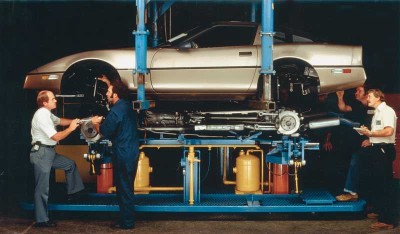 Chevy still documented Corvette "body drops" in 1985, but a C4 "chassis" was welded to the "birdcage" body structure at this point on the assembly line.