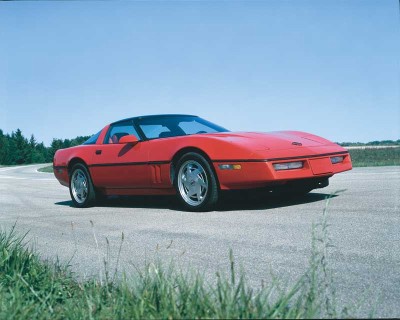 For Corvette's 35th anniversary year, the 1988 Corvette was again treated to important engine and chassis upgrades. Freer-breathing cylinder heads and a reprofiled camshaft gave the L98 small-block another five horses -- now up to 245 bhp, though torque was unchanged. Z51 and Z52 suspension packages now included 17-inch wheels; these were newly styled 17 X 9.5 "Cuisinart" rims wearing huge, P275/40ZR-17 Goodyear Eagle GTs. Enthusiasts were quick to note the tires' "Z" speed rating, indicating that they were good for sustained running at over 149 mph. The new wheel styling was also applied to the standard 16 x 8.5-inch rims, which were likewise upgraded to Z-rated rubber of 255-mm section.

To make the most of the new higher-performance tires and for better directional control in hard stops, front suspension geometry was reworked to incorporate "zero scrub radius." This means a steering axis that intersects the road at the exact center of the tire's contact patch, rather than outboard (positive scrub radius), as on previous Corvettes, or inboard of it (negative scrub radius) as on some European cars.


Like the Porsche 928 of the day, the C4 had always had its pull-up handbrake mounted outboard of the driver's seat, with a lever that could be folded down after engagement so as not to interfere with entry/exit. This was retained for 1988, but the assembly was moved a bit lower and farther back to be a bit less intrusive. In addition, interior air extractors in coupes were modified to increase the flow rate as an improvement to the climate-control system, which was now offered with the extra-cost automatic temperature control that was phased in toward the end of 1987 production.


With total Corvette production nearing 900,000 units sold over a span of 35 years, it was time to mark another anniversary with a special-edition Corvette. Recalling the Waldorf debut of the original '53 Motorama car, the anniversary car bowed at the New York Auto Show on April 1, 1988, with announced production of only 2,000 units (actually, 2,050 were sold). Offered only as a coupe, the 35th Anniversary edition -- officially, the $4,795 option package Z01 -- offered a bright white lower body (including color-matched door handles, mirrors, bodyside moldings, and 17-inch wheels) set off by a black roof hoop and transparent black acrylic roof panel. Special commemorative badges appeared above the front-fender "gills," and as embroidery on the seatbacks in an all-white leather-upholstered interior. Other standard features included dual six-way power sport seats, automatic climate control, the GM-Delco/Bose audio system, and heated door mirrors.

While the 35th Anniversary car was a sellout, it wasn't enough to lift the Corvette's fortunes at dealerships. The sales downturn continued for 1988, with production slipping to just under 23,000 units, the lowest model-year total since 1972.

Meanwhile, the C4 was continuing Corvette's winning ways on the track -- it was the undefeated class champion in SCCA Showroom Stock racing for three straight years. Fifty-six street-legal cars were built for the 1998 SCCA Corvette Challenge series. Stock engines would come from the CPC engine plant in Flint, Michigan, shipped to Bowling Green for installation, and the cars would then be trucked back to Wixom, Michigan, for roll cages and other racing modifications. During the course of the year, Chevy would replace most engines, however, swapping them for motors having more evenly calibrated power output.

The 1988 Corvette was fortified with plenty of upgrades to the engine, chassis, steering, and brakes. Chevrolet also released a special 35th Anniversary package for 1988. Here are the specifications for the 1988 Corvette: 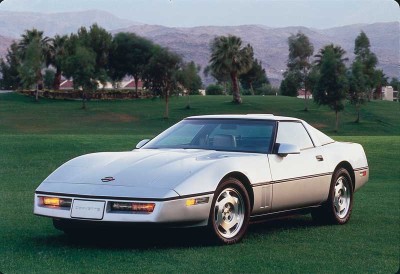 The 1988 Corvette was the last C4 available with the interesting "4+3" manual transmission.