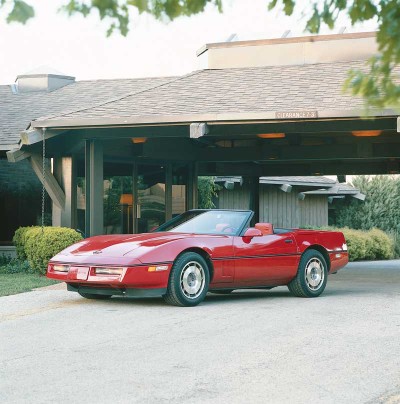 The 1987 Corvette coupe and convertible saw several noteworthy changes. Chevy's continuing quest for reduced engine friction in the interest of both performance and economy resulted in rollers being added to the hydraulic lifters, along with rocker-arm covers with raised rails to forestall oil leaks. Thanks chiefly to the former, horsepower went up by 10, to 240 in all, and torque improved by 15 lbs/ft, for a total of 345. A six-way power passenger's-seat option was now offered (matching the standard driver's item), and major body and mechanical components were given special identification marks to further foil thieves.

What's more, a second suspension option was made available only on manual-transmission-equipped coupes; designated Z52 and priced at $470, this was essentially a softer version of the Z51 package, with the wider (9.5-inch) wheels, plus a solid and thicker front anti-roll bar, the new gas-charged shocks, quick-ratio steering, and all but one of the chassis stiffeners developed for the convertible. A thicker-core radiator and a second electric cooling fan were also included. Spring rates and bushings were carried over from the base chassis.

The racing-oriented Z51 suspension, listing at $795 for 1987, had all the Z52 hardware but much stiffer springs and front lower-control-arm bushings, plus a solid (instead of link-type) rear stabilizer. Enthusiast magazines praised the new suspension for the improved ride quality with only the most minor differences in handling characteristics.

On the acceleration side of things, Motor Trend timed a manual-shift 240-bhp roadster at 6.3 seconds 0-60 mph and clocked the standing quarter-mile at 15.11 seconds and 93.8 mph. With prices now starting at $27,999 for the coupe and $33,172 for the ragtop, critics felt the Corvette was becoming too pricey for its own good, though it was still perceived as being a better value than the European exotics of the time.

Though not a factory option, speed-hungry buyers could order a car with a new Callaway Twin-Turbo Engine package through participating dealers. Designated as RPO B2K, and priced at a budget-busting $19,995, the twin-turbo was rated at 345 bhp and 465 lbs/ft of torque and could reach a top speed more than three times the legal limit -- all the way to 177.9 mph with .60 overdrive gearing. These were specially modified Corvette engines (except for the first four off the line, which used GM truck shortblocks); cars would be shipped from Bowling Green to Callaway Engineering in Old Lyme, Connecticut, for modification.

Corvette sales continued their downward trend on the 1987 model year, sliding to 30,632; of that figure, convertibles accounted for 10,625 units, which was 3,400 above the 1986 Corvette total. Exactly 184 well-heeled buyers opted for the Callaway twin-turbo version.

The year 1987 brought more horsepower to the Corvette, and with it came increased torque. For those looking for a little less speed, Chevy offered the Z52 package, which was essentially a softer version of the Z51. Here are the specifications for the 1987 Corvette: 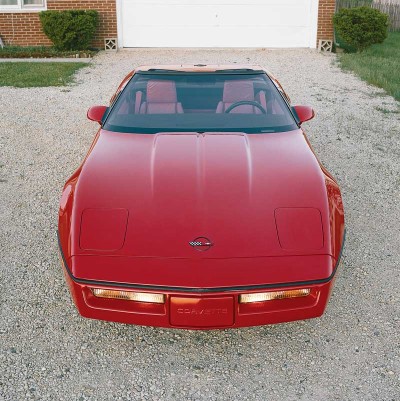 Horsepower was up to 240 for 1987 via a revised exhaust system and low-friction roller-type valve lifters for the aluminum-head L98 V-8, new for the 1986 Corvette. Automatic transmission remained C4 standard, with an innovative "4+3" manual gearbox optional.

Color Choices and Production
Learn about other Corvettes in this generation: