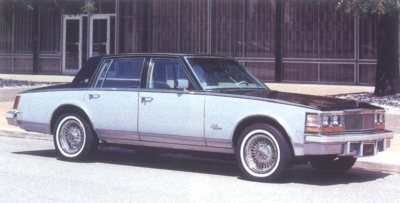 For starters, there were some raised eyebrows about the Cadillac Seville's base price of $12,479. That seemed very steep when Cadillac's full-size 1975 Calais started at $8,184, the Eldorado coupe cost $9,935, and the Eldo convertible $10,354. Says Bob Templin: "There were still some people in the marketing department who maintained that smaller's got to be cheaper. They felt the Seville had to come in under the DeVille if it's going to sell.

"Well, by the time we put in all the engineering effort, even though we got the Nova body shell, but after we reskinned it and spent all that money on the exterior tools and stuff, the numbers were adding up. It was not going to be an inexpensive car. We said, 'Okay, let's throw the book at this car, put on every goody we can think of ... let's doll it up and make an absolute slick thing out of it, and price it above the DeVille.' So that's where we ended up."

"We introduced the Seville on the West Coast," Templin continues, "and I went to a couple of dealer introductions. These were by invitation only. The dealers had invited all their loyal customers. One dealer in Burlingame [just south of San Francisco] actually had a fountain with running champagne. It was a real event.

"The car took off in California like gangbusters. If a customer came into a dealership for regular Cadillac service, they'd let him drive a Seville home as a loaner. After his wife drove the Seville, she wouldn't give it up. The car was an absolute revolution for a lot of people. The thing was just so solid on the West Coast and, of course, it became a financial success very quickly. Any doubts anybody had about paying for the Seville's tools or about the car not succeeding in the marketplace [were erased once] the car took off and was very, very successful."

That's certainly true. According to Automotive News's annual industry reviews, Seville calendar-year production came to 36,826 in 1975; 39,275 in 1976; 49,190 for 1977; 59,794 in 1978; and 48,295 for 1979 (during which production shifted to a front-wheel-drive second-generation model). California remained the Seville's main market, consistently capturing 35 percent of total sales. Demand was also strong in Florida and along the upper eastern seaboard. It tended to be weakest, according to Gordon Horsburgh, in middle America, where large cars still ruled.

Continue to the next page to read about the 1977 Cadillac Seville and its reception around the world.