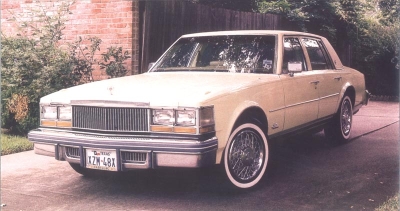 Like most of its kind, this Colonial Yellow 1978 Seville is powered by the 350-cube fuel-injected gasoline powerplant.
©2007 Publications International, Ltd.

The 1976 Cadillac Seville specifications and features included interesting innovations. One was body bolts that used micro-encapsulated epoxy. When these bolts were tightened at the factory, the little capsules popped, the epoxy oozed out, and then hardened in place. Lock washers weren't needed. GM soon began using micro-encapsulated body bolts on other car lines.

Oldsmobile supplied the Seville's 350-cubic-inch ohv V-8, but Cadillac added an intake manifold of its own design, plus Bendix electronic fuel injection. The latter employed sensors for engine and ambient-air temperature, throttle position, vehicle speed, and manifold air pressure, plus a computer (or ECU, for "electronic control unit") that rested underneath the passenger's seat. Two fuel pumps, one inside the 21-gallon gas tank and the other mounted to the chassis, along with a pressure regulator and return line, fed the engine fuel rails. Each of the eight injectors shot atomized gasoline into the manifold just ahead of an intake valve.

This Bendix system was a speed/density type rather than the more modern mass-airflow design, which requires more computer memory. The Seville's ECU had to compute only one thing: injector band width (duration) versus manifold pressure. The number of injections per unit of time was tied directly to engine speed. The Seville V-8 delivered 180 horsepower at 4,400 rpm, 10 more than the Olds version with four-barrel carburetor.

Although the Seville arrived with a catalytic converter, fuel metering was so precise that the engine could pass 1976 California smog standards without one. But the main benefit of electronic fuel injection was improved drivability. Cars of the early Seventies typically suffered from hard starts, hesitation, and dieseling. The Bendix system solved those ills, although a few early CPUs failed in the field. The failures prompted Bendix and GM to add redundant and "limp-home" circuits.

The Seville's only available transmission was the three-speed Turbo Hydra-Matic 375, a smaller version of the THM 400. Brakes consisted of 11-inch discs up front and wide 11-inch drums aft. The live rear axle came directly from the Nova, but used a relatively high 2.56:1 differential ratio, which helped fuel economy. Mileage estimates ranged from 17 to 21 mpg, which for a 1976 Cadillac was phenomenal. Full-sized Cads were still turning in single-digit fuel figures.

Seville road tests put the car's 0-60-mph acceleration at around 13 seconds. Top speed ranged from 112 to 118 mph. These numbers rivaled those of the Mercedes 450SE. Magazine editors agreed that the Seville had better handling than most U.S. cars, but still wasn't up to its European competitors. The variable-ratio steering was admirably fast but lacked precision. Other than that, the car was quiet, the ride felt good, and the entire package seemed amazingly well put together. Assembly took place at Cadillac's Clark Avenue West plant in Detroit at the rate of 14.5 cars an hour.

One thing the Seville didn't lack was standard equipment, though a few journalists wondered whether Cadillac had not substituted gadgetry for substance. Where were the four-wheel disc brakes, they asked. And this was Detroit's idea of an "international" sport/luxury sedan's instrument cluster? The panel contained a speedometer, a fuel gauge ... and that was it! Where were the tachometer and gauges for oil pressure, volts, and temperature? Why must America's most expensive car have idiot lights?

On the next page, read about the Cadillac Seville's sales successes.