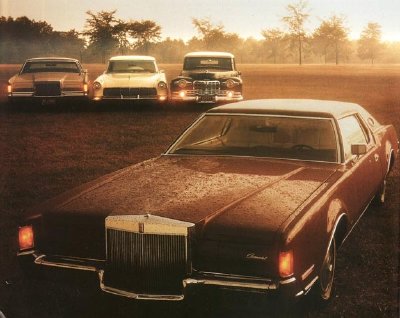 The Lincoln Continental was reincarnated in the 1970s as a luxury personal coupe. See more classic car pictures.

Though the Lincoln Continental Mark IV moniker already had been used on an ocean liner of a Lincoln in the 1950s, its reincarnation on a 1970s personal coupe showed that when it came to luxury car buyers, Ford's prestige marque had their number.

Let's begin by making one thing perfectly clear: Our subject here is a Nixon-era Lincoln, not one of the big boxy Continentals from the late Eisenhower years.

Thus, when Ford Motor Company VP Lee laccoca proposed a new "personal" Lincoln for 1969, Hank the Deuce insisted it be called Mark III instead of the more logical Mark VI. It's almost as if he was trying to salvage family pride by rewriting history -- as he probably was.

But that new Mark made history all its own, and set the stage for an even more successful "second" Mark IV. Each was a stroke of genius, to a large degree the genius of Lee lacocca.

lacocca had led Ford Division in 1960-1965, where he pushed the personal-luxury Thunderbird to higher sales through increased size and glitz. Lincoln, meantime, found salvation with an elegant new 1961 Continental that was considerably smaller -- until the economy turned super-strong and the car started growing for 1964.

But that only left room for a smaller, more exclusive companion model to pick up where the Mark II had left off, or so lacocca evidently thought.

This time, though, there would be no unique body and chassis with all their associated expense. No slow hand craftsmanship either -- and certainly no losing money on each car sold.

Instead, the new Mark would be a cost-wise profit-maker using the basic Thunderbird frame and inner body structure. It would even be built in the same plant, much as the Falcon and Mustang were.

L. David Ash was appointed design director for the project, assisted by Arthur Querfeld, Damon Woods, and Hermann Brunn. But it was lacocca who decided which ideas got used.

Iacocca also decreed all the gizmos and interior trappings associated with late-1960s luxury never doubting that his taste was exactly the same as the rest of the public's.

Fortunately for Lincoln, it was. Though the Mark III may have looked baroque next to Cadillac's crisp new front-drive Eldorado, it sold like no Mark before. Exactly 7,770 were built as "early 1969" models (introduction was spring 1968), which nearly equaled combined production of the "Mark I" and II.

There was no mystery here. The Mark III delivered prestige-car looks, a certain historical mystique, and all the expected amenities at a fair price ($6,741 base in 1969). Once again, laccoca had unearthed a rich new vein of sales. The only thing left was to keep working the mine.

To learn about the 1972 Lincoln Continental Mark IV's exterior, continue on to the next page. 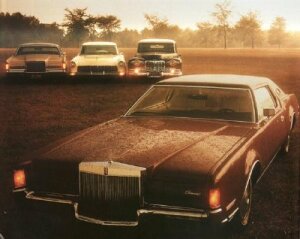