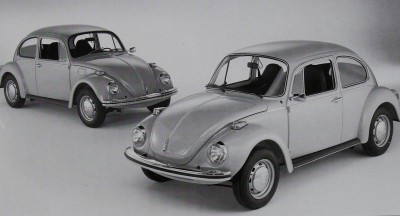 The easiest way to distinguish the standard 1973 Volkswagen Beetle (back) from the 1973 Super Beetle (front) is the larger lip on the Super's trunklid.
2007 Publications International, Ltd

How did its maker treat the 1973-1980 Volkswagen Beetle? "Benign neglect" would describe it well. Volkswagen had seen its future, and the watchwords were water-cooled front-mounted engines and front-wheel drive. That left the air-cooled, rear-engine, rear-wheel-drive Beetle in the lurch.

The first of Volkswagen's new generation designs, the midsize Passat/Dasher, appeared in 1973, but it wasn't until March 1974 that the Volkswagen Beetle's true successor appeared as the Golf (Rabbit in America). With that, Wolfsburg ceased building Beetles in July 1974, and January 1978 saw the last German-made Beetle exit Volkswagen's Emden plant (established in the 1960s).

Karmann coachworks continued making Volkswagen Beetle convertibles for another two years, however. As always, convertibles shared all the changes made to sedans, but never lost their distinctive padded and insulated top that folded into a bulky heap.

Yet even as sales declined in the industrialized world, the Volkswagen Beetle tried to keep pace with additions and improvement from year to year.

The 1973 Beetles were still-larger, with stronger bumpers that added 1 inch to the overall length. Also new for the year were inertia-reel seatbelts and 6.00 × 15 tires. Emission controls weakened U.S. models to 46 horsepower (SAE net) and 72 pound-feet of torque.

In order to spur flagging sales, Volkswagen started pushing "sport" and "luxury" versions of the Beetle, despite the apparent oxymoron. An English entry was the 1973 GTBeetle, but American derivations appeared as well, including the Baja Bug, Sports Bug, Sun Bug, and La Grande Bug.

For the 1974 Volkswagen Beetle, bumpers were bolted to energy-absorbing mounts, and an ignition interlock prevented the engine from being started unless the seatbelts were fastened.

By this time, what later became known as the "first gas crisis" was in full swing, and while that should have helped a car whose name was virtually synonymous with economy, instead Volkswagen Beetle sales slumped by more than 30 percent. Capitalizing on the famous Walt Disney movie, a special Love Bug edition was released that year with sport wheels and blacked-out trim -- even though the flick had come out five years before.

For the 1975 Volkswagen Beetle, Volkswagen added fuel injection to the venerable flat four, which improved driveability, though California models needed a catalytic converter to meet the state's tougher emissions regulations.

Perhaps the biggest news of the 1975, however, was both sad and prophetic; in the United States, Volkswagen lost its traditional title as the best-selling import to Toyota.

Based on the promise that each year's model was improved over the year before, the 1976 Volkswagen Beetle brochure presented "the best Beetle ever built." Changes were few by this time, yet the copy went on to proclaim that it would be "another whole year before you find a better one." That "better one" in 1977 would be the last for the U.S. market -- at least in sedan form.

By 1979 the only Volkswagen Beetle sold in the U.S. was the convertible. Based on the Super Beetle, it was richly appointed and aimed more at fashion than frugality.
2007 Publications International, Ltd

­For more great articles and pictures on new and classic Volkswagens, see: