In the 1970s, Volkswagen began pushing sport and luxury versions of the Beetle,
2007 Publications International, Ltd

Events gradually overtook the 1970-1997 Volkswagen Beetle. The beloved Bug would be regulated out of existence in some countries, and outsold in others by more modern small cars -- including some Volkswagens. But if the Beetle couldn't compete against newer designs, it would come to play an important transportation role in emerging economies, just as the original Beetle had.

By the mid 1970s, the Beetle had lost its way in America, gaining upscale features that were at odds with its honest and humble persona. VW stopped selling Beetle sedans in the U.S. after 1977, and halted convertible sales during 1980. The last Beetle built in Germany rolled off the line in early 1978.

But, pared to its essentials, the Beetle's appeal as a "people's car" remained strong in developing nations, and production chugged along in places like Brazil and Mexico to reach a grand total of more than 21 million.

The 1970-1972 Volkswagen Beetle faced a flood of challenges, including a rising price, a stale design, fresher competitors, and ever-more-stringent safety and emissions standards.

In 1971, Volkswagen of America ran an ad in which a Beetle-shaped squiggle appeared above the words, "How much longer can we hand you this line?" As it turned out, the question had two answers: "not much" and "indefinitely."

The latter referred to developing nations, where the Beetle remained viable as a simple, low-cost car able to cope with all sorts of adverse conditions -- a Volkswagen in the best, original sense. But to the more affluent, demanding buyers of North America and Western Europe, the Beetle was becoming irrelevant.

At the same time, a raft of safety and emissions rules were threatening to legislate the car out of existence on both sides of the Atlantic. Volkswagen Beetle ownership was no longer so special either, as rival manufacturers had copied the consistent look and customer-friendly sales and service pioneered by VW dealers.

But mostly, the 1970-1972 Volkswagen Beetle was just an old design with only fuel economy, workmanship, and durability to recommend it. "If you value [those] virtues above all others, then the Beetle is for you," said Road & Track in 1971. "Otherwise, it is hopelessly outdated and outdone by both Japanese and American economy cars."

To its credit, Volkswagen did what it could to keep the Volkswagen Beetle from falling even further behind.

Key changes for American and European 1970 Volkswagen Beetle models included an engine increased to 1600 cc (as on Type 3), and horsepower increased to 57. The models also adopted an ignition-key warning buzzer and larger front turn signals.

VW introduced the Super Beetle in 1971. Its front suspension made more room for luggage and a convex windshield helped the cabin feel larger.
2007 Publications International, Ltd

The 1971 Volkswagen Beetle's horsepower was bumped to 60, taillamps were enlarged again, and flow-through ventilation was adopted. The 1971 Volkswagen Super Beetle (1302S in Europe) was introduced, with coil-spring MacPherson-strut front suspension, 3.2-inch longer nose, 0.8-inch longer wheelbase, 11.1-gallon gas tank (versus 10.6), 3 cubic-feet more trunk space, and a reduced turning circle. Also that year, a stripped base sedan was added as the $1,845 price leader.

The 1972 Volkswagen Beetle lineup also adopted a larger rear window, four engine-lid cooling slots (versus two), a revised speedometer and control stalks, and a hinged parcel shelf behind the back seat.

Amidst the gloom of slumping sales, Volkswagen nonetheless had reason to celebrate. Early in 1972, total Volkswagen Beetle sales topped 15,000,000, surpassing those of the Ford Model T to earn the bug the title of "world's most popular car."

Though some traditionalists scorned the 1971 Volkswagen Super Beetle, it offered worthwhile features at only a slight cost penalty.
2007 Publications International, Ltd 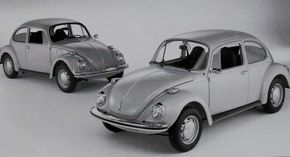 The easiest way to distinguish the standard 1973 Volkswagen Beetle (back) from the 1973 Super Beetle (front) is the larger lip on the Super's trunklid.
2007 Publications International, Ltd

How did its maker treat the 1973-1980 Volkswagen Beetle? "Benign neglect" would describe it well. Volkswagen had seen its future, and the watchwords were water-cooled front-mounted engines and front-wheel drive. That left the air-cooled, rear-engine, rear-wheel-drive Beetle in the lurch.

The first of Volkswagen's new generation designs, the midsize Passat/Dasher, appeared in 1973, but it wasn't until March 1974 that the Volkswagen Beetle's true successor appeared as the Golf (Rabbit in America). With that, Wolfsburg ceased building Beetles in July 1974, and January 1978 saw the last German-made Beetle exit Volkswagen's Emden plant (established in the 1960s).

Karmann coachworks continued making Volkswagen Beetle convertibles for another two years, however. As always, convertibles shared all the changes made to sedans, but never lost their distinctive padded and insulated top that folded into a bulky heap.

Yet even as sales declined in the industrialized world, the Volkswagen Beetle tried to keep pace with additions and improvement from year to year.

The 1973 Beetles were still-larger, with stronger bumpers that added 1 inch to the overall length. Also new for the year were inertia-reel seatbelts and 6.00 × 15 tires. Emission controls weakened U.S. models to 46 horsepower (SAE net) and 72 pound-feet of torque.

In order to spur flagging sales, Volkswagen started pushing "sport" and "luxury" versions of the Beetle, despite the apparent oxymoron. An English entry was the 1973 GTBeetle, but American derivations appeared as well, including the Baja Bug, Sports Bug, Sun Bug, and La Grande Bug.

For the 1974 Volkswagen Beetle, bumpers were bolted to energy-absorbing mounts, and an ignition interlock prevented the engine from being started unless the seatbelts were fastened.

By this time, what later became known as the "first gas crisis" was in full swing, and while that should have helped a car whose name was virtually synonymous with economy, instead Volkswagen Beetle sales slumped by more than 30 percent. Capitalizing on the famous Walt Disney movie, a special Love Bug edition was released that year with sport wheels and blacked-out trim -- even though the flick had come out five years before.

For the 1975 Volkswagen Beetle, Volkswagen added fuel injection to the venerable flat four, which improved driveability, though California models needed a catalytic converter to meet the state's tougher emissions regulations.

Perhaps the biggest news of the 1975, however, was both sad and prophetic; in the United States, Volkswagen lost its traditional title as the best-selling import to Toyota.

Based on the promise that each year's model was improved over the year before, the 1976 Volkswagen Beetle brochure presented "the best Beetle ever built." Changes were few by this time, yet the copy went on to proclaim that it would be "another whole year before you find a better one." That "better one" in 1977 would be the last for the U.S. market -- at least in sedan form.

By 1979 the only Volkswagen Beetle sold in the U.S. was the convertible. Based on the Super Beetle, it was richly appointed and aimed more at fashion than frugality.
2007 Publications International, Ltd

­For more great articles and pictures on new and classic Volkswagens, see:

Returning to its roots: The simple, inexpensive 1981 Volkswagen Beetle 1300 was produced at Volkswagen's Brazil factory for sale outside the U.S.
2007 Publications International, Ltd

The 1980-1997 Volkswagen Beetle became an unlikely instrument of national politics and a lever for social uplift. If it was failing in America against new rivals, there were places in which it was staying true to its original mission as a "people's car."

As Volkswagen moved into the 1980s, its plants in Brazil and Mexico were turning out 250,000 Volkswagen Beetles each year for local consumption and for export. The latter included CKD (complete knock-down) kits for assembly in countries like Costa Rica, Nigeria, Portugal, Peru, and Thailand.

For a time, Mexico supplied cars to satisfy residual demand in Germany. Fittingly, its final such shipment was made in August 1985, almost 40 years since Major Ivan Hirst's ramshackle little colony set up in the bombed-out chaos of Wolfsburg.

Mexico was also the sole source for the Volkswagen Beetle-based Type 181 of 1970-1976, a stark, square Kubelwagen-style open four-door originally developed for the German military and known in America as "The Thing."

In 1985, Volkswagen estimated that some eight million Beetles still traveled the world's roads, a million in Germany alone. The next year, though, Beetle production was halted in Brazil as that nation struggled with hard times fueled by triple-digit inflation; that also ended most CKD operations.

Then, in 1993, Brazilian president Itamar Franco ordered production resumed. Like Adolf Hitler, he saw the cheap, cheerful Fusca (as the Beetle was known there) as a way to curry public favor and provide needed jobs. Mildly updated, the Fusca lasted through 1996, by which time sales had again plunged in a strongly revived economy.

In Mexico, too, the Beetle became an instrument of national politics and social uplift. There, in 1992, the government dangled a contract for a "popular" car before all the local automakers, which included Chrysler, Ford, General Motors, and Nissan.

As the Los Angeles Times noted in March 1998, the Vocho is "pure, functional transport with the advantage of . . . basic technology and dead-simple repairs." Even drugstores carried accessories, and as one enthusiast said, a Vocho could be fixed with just "a wire and a Chiclet." As ever, the Volkswagen Beetle was easy to love and tough to kill.

The Beetle had thus come full circle after some 60 eventful years. It revived Germany after World War II, made import cars a worldwide phenomenon, and introduced Americans to the idea of high-quality cars at any price. It had raced up mountains, become a dune buggy for the beach, been personified in movies (Disney's Love Bug series), and adopted as a social statement.

Through its first six decades, the Beetle had stayed true to its original mission of basic transportation for common folk everywhere. But Volkswagen had a new Beetle on the way, and in more ways than one, the Bug was headed for an about-face.

Though the Volkswagen Beetle's days had ended in the U.S. and it was no longer being built in Germany, it continued to be produced in Brazil. What came off the line was a standard Beetle (not a Super Beetle). Ferdinand Piech, grandson of Ferdinand Porsche, moved up through the ranks at Audi, Volkswagen's partner, finally becoming chief of Volkswagen itself in 1993.

Shunned by upscale buyers, the Beetle remained a vital source of jobs and mobility in developing nations. Here are 1981 Bugs on the line in Brazil.
2007 Publications International, Ltd