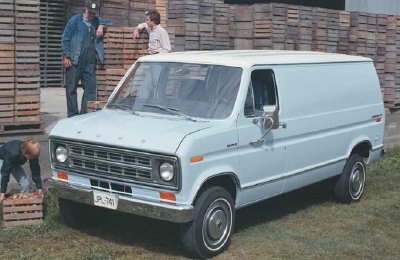 It was the Ford Econoline's turn to shine for 1975, sporting its first redesign since growing larger in 1968. But what would turn out to be an even bigger event -- although it was hardly that at the time -- was the introduction of a "heavy 1/2-ton" Ford F-Series pickup truck. Called the F-150, it was intended to be a gap-filler between the F-100 and F-250. But what it ended up being was the first of what would eventually become America's most popular vehicle.

A bigger, brawnier Ford Econoline family was launched for 1975. Mounted on a separate frame for the first time ever, new E-Series vehicles were available on longer wheelbases of 124 and 138 inches. Gross vehicle weights rose across the board, too, which showed in new nomenclature. The Ford E-100 was joined by the E-250, E-350, and an all-new E-150 version.

The F-Series pickup line changed little for 1975, with one exception: added was an F-150 model, which was intended to split the difference in payload capacity between the F-100 and F-250. Although hardly a major event at the time, the Ford F-150 would eventually take over from the F-100 as Ford's base full-size pickup, and it would go on to become the best-selling vehicle in the United States.

Bronco likewise received few changes for 1975, though front disc brakes were made available late in the model year.

Ford caught on to the latest craze by introducing Cruising Vans for 1976. Learn more in the next section.