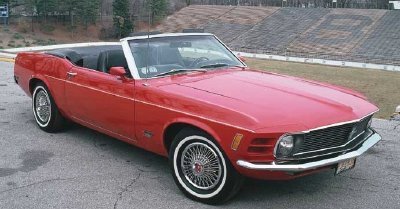 Mustang styling was visibly cleaner for 1970, especially on standard-trim models like this convertible.

In 1969, Ford bean-counters tallied another decline in total Mustang sales. Though the model-year loss was modest -- only 5.5 percent vs. '68 -- it looked ominous after all the money spent on the '69 program. Interestingly, of 184,000 cars delivered in the first half of calendar '69, the Grande accounted for only about 15,000 sales while the Mach 1 ran close to 46,000. On cue, division general manager John Naughton promised "heavy emphasis on performance" with "hardware to meet the action requirements of buyers everywhere."

But after the '69 overhaul, Mustang could not be changed very much for 1970. Designers did tidy up the face, filling each "sugar scoop" with two simulated air vents and reverting to dual-beam headlamps within a grille switched from mesh to thin horizontal bars. The tri-color emblem moved to the grille center except on Mach 1, where it was left off. Ornamentation was shuffled. Body side scoops were erased. The posh Grande got a part-vinyl "landau" roof, but the previous full covering was now a $26 extra.

Like other 1970 fastbacks, the Mach 1 lost its upper-bodyside scoops but gained the Boss 302's rear-window louvers as a new option.

Engine choices expanded with the addition of a four-barrel 351 packing 300 horsepower on tight 11:1 compression, and four-speed transmissions added a Hurst linkage with T-handle shifter. The separate GT option was dropped, but Mach 1s retained most of its features. They also added a rear stabilizer bar, which allowed lower spring rates for a more comfortable ride with no increase in cornering roll.

The Boss 429 roared back with a little-changed 820T engine, then substituted an 820A unit with minor adjustments in the Thermactor emissions-control system -- a sign of the times. A newly available Drag Pack fortified any 428 engine with stronger con rods, heavy-duty oil cooler, and other upgrades for quarter-mile duty.

A combination of low production, high performance, and historical interest worth many times its original price, even adjusted for inflation.

Mustang reclaimed the Trans-Am manufacturer's trophy in 1970 but sagged in the sales race, now even more competitive. A beefy new Dodge Challenger and a companion Plymouth Barracuda arrived to do battle, followed at mid-season by a handsome second-generation Chevrolet Camaro and Pontiac Firebird.

With this, plus softening demand for pony cars in general, Mustang model-year sales fell an alarming 36.4 percent to 190,727 units. Hardtops plunged 35 percent, fastbacks and convertibles by around 40 percent each. While the Mach 1 still accounted for a solid proportion of fastback sales, other performance models at Ford and rival manufacturers were overshadowing it. A small bright spot was the Boss 302, which soared to 6319 sales despite its specialized nature, limited availability, and stiff price.

On September 11, 1969, Bunkie Knudsen was abruptly fired after less than two years as Ford president. Larry Shinoda fast followed his patron out the door. Henry Ford II would only say "things just didn't work out," though he never elaborated on that in line with his longtime motto, "never complain, never explain." But insiders suggested that Bunkie, like his father, had stepped on too many toes. "Knudsen moved in and started doing things his way," wrote analyst Robert W. Irvin of trade weekly Automotive News. "Knudsen was almost running the company and [some said] he had alienated many other top executives.

Others said Knudsen's departure was an indication of how the Fords don't like to share power. Tellingly, Irvin wrote that in July 1978 on the firing of Lee Iacocca. To soothe ruffled feathers, Ford's chairman set up a presidential troika of R. L. Stevenson for International Operations, R. J. Hampson for Non-Automotive Operations, and Iacocca for North American Operations. But that lasted less than a year. Iacocca was named sole company president in 1970, finally snatching his long-coveted brass ring.

Mustang fans will forever thank Knudsen for the legendary Boss 302 and 429. All things considered, they were an amazing achievement for his brief tenure. Yet how ironic that the "father" of the pony car would be left to preside over the new Mustang breed that Knudsen also rushed through, but wouldn't be around to introduce. Though Lee Iaccoca was no doubt happy to see Knudsen dumped so unceremoniously, Bunkie would exact a sort of unintended revenge when his big new '71s proved the most controversial Mustangs yet.