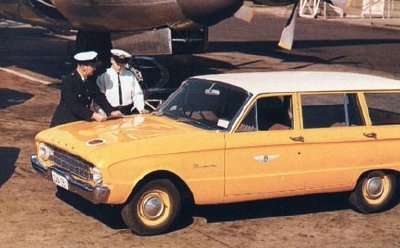 The first iteration of the Aussie Falcon, the XK generation, looked quite a bit like its American cousin. See more classic car pictures.

Ford's straightforward compact was an instant hit when it debuted in the United States, but would the Ford Falcon fly in Australia? In this article, you will learn how the Ford Falcon faired overseas.

The Falcon represented the first head-to-head challenge to Holden's since the GM subsidiary began dominating the market with its range of medium-sized six-cylinder sedans starting in 1948. Its release was the culmination of years of in-house negotiations that had seen Ford lose the initiative in Australia to GM in 1945 and forced it to play catch-up for the next four decades.

Immediately prior to World War II, Australian car companies primarily were import arms and local assembly operations for overseas firms doing business "Down Under." There was no manufacturing. Later, when the tide of war turned toward the Allies, some thought began to be devoted to the industries that would replace armaments when peace returned.

One of the ideas that appealed to the Australian government was the establishment of a domestic motor industry, so much so that the government let it be known it would form a corporation to build a homegrown car if the firms already doing business in Australia weren't interested in doing so themselves.

Lawrence Hartnett, managing director at GM-H, quickly submitted a proposal for an Australian car, then set about trying to convince his superiors in the United States that they should support it. However, Ford Australia -- under the leadership of H. C. French -- badly bungled its proposal for Australian manufacture when the federal government requested submissions from the industry.

French left for discussions with his masters in Canada on October 7, 1944, following receipt of the government's proposal. While GM-H's submission was for a compact six-cylinder family sedan, the Ford concept was far broader: It suggested a range comprising a sedan, station wagon, utility, and light trucks, but was based on a 1942 Mercury V-8 design that was unacceptable to the government.

Apart from proposing a larger, more expensive, and less fuel-efficient range of cars based on old technology the fatal flaw in French's proposal was to ask the government up front for £850,000 (approximately $1.7 million) to offset the massive capital costs for the project and for the government to raise import duties on imported chassis and components.

Competition grew to bring a new automobile to Australia and Ford was right in the thick of it. Read about the road Ford went down that eventually brought them to the Falcon on the next page.