The 1960-1961 Plymouth Fury was an attempt by Plymouth to capitalize on the success of earlier, limited production Fury models.

Through 1959, the Plymouth Fury had been a limited production performance Plymouth. By 1960, the name was too good to squander on such a small market, so "Fury" replaced "Belvedere" as the top-of-the-line model designation, with a four-door sedan and four-door hardtop joining the previous two-door hardtop and convertible. All, of course, used Plymouth's new unibody construction.

The change made good business sense. The styling of the 1960 Plymouth Fury didn't. It had been conceived in 1957, when tailfins were all the rage, and fin-wise it was as good as the best of them. The problem was that the public had grown tired of tailfins by 1960. Worse, Plymouth sales had been skidding since the 1958 recession. Thus, while Ford and Chevrolet increased their combined production by about a quarter-million units in 1960, Plymouth barely maintained its 1959 volume level.

Then on the 1961 Plymouth Fury, the fins vanished entirely, replaced by a rounded shape with a swoopy front end that Motor Trend once retrospectively compared with "a generation of Japanese sci-fi monsters." The public remained unimpressed, and was now also confused: Plymouth sales dropped by 100,000 and Rambler replaced Plymouth as the number three best-seller.

None of which should suggest that these 1960-1961 Plymouth Furys were bad cars. Compared to their arch rivals, they were as good in most ways and superior in some. Every road tester agreed that they easily outhandled the Chevrolet Impala and Ford Galaxie, their counterpart top-of-the-line competitors, thanks to their torsion bar front suspension. Plymouth's TorqueFlite automatic was better than Chevrolet's Turboglide or Ford's Cruise-O-Matic. Fury's unit body was tighter than the separate body/frame rigs of the opposition, and so on.

The Fury also had two exclusive options: swivel seats that pivoted when the front doors were opened, and the RCA Victor "Highway Hi-Fi" record player. But it was styling that sold cars in 1960, and styling, in the public's judgment, was not the Fury's strong point. 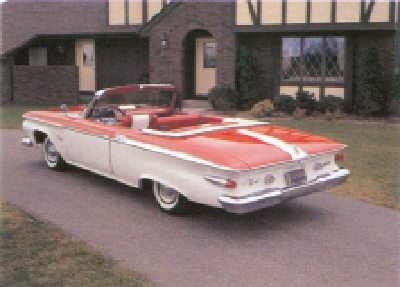 The fins on the 1961 Plymouth Fury were planed down and bent over to shield bullet-style taillights.
©2007 Publications International, Ltd.

The 1960-1961 Plymouth Fury continued the Fury tradition of exceptional performance. The 1960 Fury could be had with a six-cylinder engine, the excellent 225 Slant Six, which gave Plymouth the hottest six in the low-priced field. With 145 bhp and a manual transmission (and aided by Plymouth's relatively light weight), a Fury six could do 0-60 in 17 seconds and still average 20 miles to the gallon.

This engine was amenable to much hotter tuning -- experimental versions wrung out one bhp per cubic inch at the Chrysler proving ground. But planners never opted for a performance six, and the Fury relied on Plymouth's reliable 318 as its basic V-8.

For all-out performance Plymouth had a bomb: the "Golden Commando 395," which had 361 cubic inches along with a ram manifold and twin four-barrel carbs, delivering 305 bhp and 395 pounds/feet of torque (from which it got its name). New also was the first of Plymouth's now-famous 383 V-8s, packing 330 bhp in similar tune and an impressive 460 pounds/feet of torque.

This engine also boasted a one-notch-higher name: "SonoRamic Commando." It sounds like a video game today, but the SonoRamic Commando could fly. Zero to 60 took about 7.5 seconds, nonchalant cruising was possible at over 100 mph, and top speed was over 120.

Despite the apparent radical face-lift for 1961, the Fury had merely been reskinned below the beltline -- the roof and doors were unchanged, with the styling money spent on fenders, hood, and deck. Plymouth described the result as "a harmony of motion in sleek steel and bright aluminum," and viewed from the side, it didn't look all that bad! Up front there was anything but harmony, with a criss-cross grille puckered between intruding headlamp eyebrows, bending around from front fender creaselines.

Latterday critics haven't really given the 1961 Fury a fair shot. All told, it was a major improvement on the 1960. It also proved that unit body construction didn't place serious restraints on the ability of designers to create face-lifts -- a problem that had plagued Nash, Hudson, and American Motors. Unfortunately for Plymouth, styling remained key to sales. To very many people styling means the front end of the car. And from that angle, the Fury really did look like the "Insect That Ate Tokyo."

Continue to the next page to find specifications for the 1960-1961 Plymouth Fury. 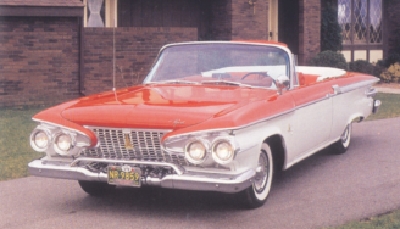 The design of the 1961 Plymouth Fury was much more subdued than its predecessor, but failed to save the Fury.
©2007 Publications International, Ltd.