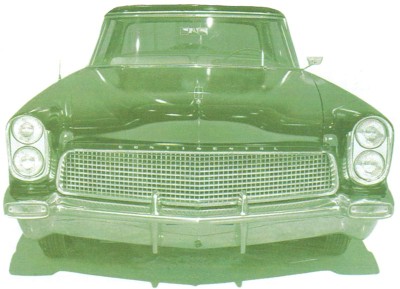 Conventional wisdom has long held that the Continental Mark II lasted only two years because Ford Motor Company lost $1,000 on each one sold. Actually, the Mark II was never intended to make money -- and that was why the 1958 Lincoln Mark II concept car never made it to showrooms.

The Continental Mark II was introduced in 1952 to answer requests for a modern successor to the classic first Continental line of 1940-1948, but it was also part of a bullish expansion plan. With Ford just returned from the financial brink and the company's future seemingly boundless, management decided to take on giant General Motors by going from two divisions to five: Ford, a separated Lincoln-Mercury, Continental, and one to handle a second medium-price make that ultimately emerged as Edsel.

The result was an elegant close-coupled hardtop coupe, impeccably made and completely free of period fads. In fact, many still rank the Mark II design as one of Detroit's all-time best.

A Mark III based on the 1958 Lincoln replaced the Mark II. The ungainly taillamps and humped trunklid were wisely discarded from this Mark III concept.
©2007 Publications International, Ltd.

Appearing for 1956 on a 126-inch wheelbase, the Mark II was priced at $10,000 -- breathtaking for the day, but reasonable given an unusual amount of hand labor and high luxury content. Indeed, air conditioning was the sole option ($740). Everything else was standard, including full power equipment.

But grand though it was, the Mark II never really got its chance. By the time it arrived, the ebullient executives who conceived it had been replaced by sober accountant types for whom no car was sacred unless it made money.

Thus, soon after the Mark II was unveiled to critical acclaim, Ford decided to proceed with more profitable Lincoln-based models for 1958. The Mark II thus disappeared after 1957 with virtually no change save a horsepower increase to 300. Total production ended at 1,769.

To find out about changes that were in store for 1958, keep reading on the next page.

When Ford discontinued the Continental Mark II after 1957, the company left behind 1958 Lincoln Mark II designs that show plans for a three-model line anchored by the familiar hardtop coupe. Only one styling change was contemplated: a mild frontal update with stacked quad headlamps (then all the rage), no vertical grille bars, and a mildly reshaped bumper.

Not that there was reason to tamper. As designer John Reinhart said later, the Mark II "was so perfect a design that we felt it could go as long as 10 years."

Differences began with a slightly taller grille flanked by stacked quad headlights, as planned for the coupe, but with the lower lights nestled in the front bumper. Bodysides bore no decoration save ribbed rocker-panel accents, a coupe-style "character line" running full-length just below the belt, and matching lower-body crease that started as a vertical line just behind the headlamps.

The third model contemplated was a two-door retractable-hardtop convertible that was not inspired by the 1957 Ford Skyliner. The "retrac" was actually engineered at Special Products in 1954 as the sole Mark II model, only to be rejected when program costs threatened to spiral out of sight. The idea wasn't passed on to Ford Division until after the decision to go with cheaper Lincoln-based 1958 Continentals.

Reinhart and other designers believed each of the planned 1958 Mark IIs would become "a 'classic' in its own right. But we got stopped at the gate."

What stopped them was a Mercury cost expert sent in to make the Mark profitable. As a result, the production 1958s were downgraded far below the proposed trio of Mark II "line extensions."

However, the "Lincolnize" decision wasn't made for six months, during which time management considered holding for a while with just the Mark II coupe to see how sales would fare. Sadly, the Berline and retrac were shelved along the way.

This Mark III clay model makes clear the 1958-1960 Lincoln was nowhere near as elegant as the Mark II.
©2007 Publications International, Ltd.

Meanwhile, Continental Division commissioned a custom Mark II convertible coupe as a gift for Mrs. W. C. Ford. Built in 1957 by the famed Derham Body Company of Rosemont, Pennsylvania, it had a soft top with very wide rear quarters as on the original Continental cabriolets. A second convertible was later cobbled out of a Mark II coupe by a private party in Florida.

The Derham car, at least, still exists, and testifies that an open Mark II would have looked great. Regrettably, Ford never thought of selling copies.

What it did sell for 1958 was the giant Mark III, a mildly restyled version of that year's blocky new unibody Lincoln on the same 131-inch wheelbase.

Styling was nowhere near as graceful as the Mark II's -- the "slant-eye" face was particularly jarring -- but buyers liked it well enough given vastly reduced prices: around $6,000 for a choice of convertible, two- and four-door hardtop, or four-door sedan.

The Mark III turned a small profit on sales of 12,550, but Dearborn's expansive "divisionalization" dream was dead, a victim of the 1958 recession and Edsel's abject failure. With that Continental ceased to be a separate make, and Continental Division was folded into a short-lived Mercury-Edsel-Lincoln unit, which then became just Lincoln-Mercury (again).

After 1960, all Lincolns were Continentals until the new Mark III hardtop coupe of 1968. Never again would Ford consider anything quite like the Mark II Berline or retractable. A pity, for they would have been glorious.