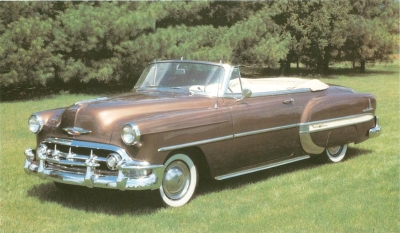 Swift managerial changes in the late Forties had ushered in Thomas H. Keating as Chevrolet general manager, brimming with confidence about the future and filled with expansive plans for it. By 1952, the division was hard at work on an all-new V-8 for an equally new group of 1955 passenger cars. Meantime, they faced the problem of how to extend the sales life of the basic 1949 platform, then looking pretty long in the tooth. Reskinning was the obvious answer.

The result appeared for 1953 as the most changed Chevrolet in five years. Singer Dinah Shore, Chevrolet's TV spokesperson in those days, introduced it as "a glamorous new star," paused while the camera cut to a close up, then gushingly asked: "Isn't that about the prettiest thing you ever saw?"

We tend to laugh at this commercial now, but the 1953 Chevrolet did look pretty good in its day.

On the mechanical side, Chevrolet scrapped its smaller "Stovebolt" six and adopted the 235.5-cubic-inch Powerglide unit for all models. Higher compression boosted it to 105 horsepower with stickshift or 115 with Powerglide. The latter version received aluminum pistons (replacing cast iron) and insert-type rod bearings plus a more modern, pressurized lubrication system. Manual-transmission engines would get these changes for 1954, when the six was retitled "Blue Flame." All this reflected the presence of new chief engineer Edward N. Cole, who'd arrived from Cadillac in May 1952 after working on that division's milestone 1949 V-8.

Go to the next page to read more about the 1953-1954 Chevrolet Bel Air's sales success. 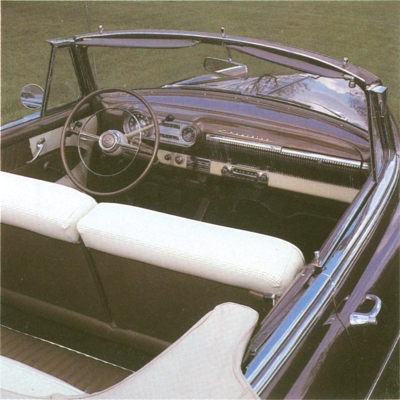 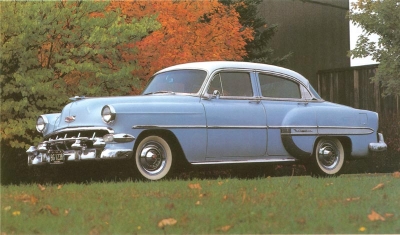