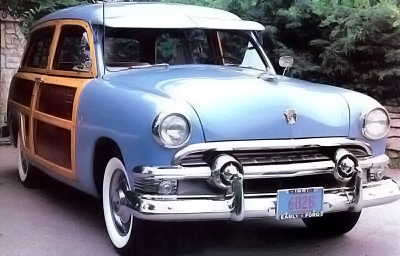 The Ford Mercury woody was named for the wood paneling on both sides of the wagon. See more classic car pictures.
Publications International, Ltd.

In the 1930s and 1940s, few cars had more prestige than the Ford/Mercury "woody" station wagon. Nearly always the highest priced model in the Ford line, it was about as practical as a backyard gazebo but carried as much status as a Chris-Craft speedboat.

While Ford led the industry in wooden-body wagon sales, production was always low, due as much to limited production capability as to the small demand. Woodies of all makes were sought after by hotels, resorts, country clubs, stables, and movie studios, and Ford's woodies were owned almost exclusively by country squires long before its wagons were ever called that.

Though highly impractical, there was something about the Ford woodies that made them slightly magical. They invariably squeaked, rattled, and groaned as glued and screwed seams came loose, and their bodywork required at least as much maintenance as a boat (owner's manuals recommended annual stripping and revarnishing).

But the country squire seemed to accept the responsibilities that went along with woody ownership. Hired help did most of the work anyway, and besides, the ritual of annual revarnishing was always a special part of the woody mystique.

To understand why Ford built woodies in the first place, you must understand the peculiar nature of Henry Ford. He believed that his company should be completely self-sufficient, from mining ore and operating rubber plantations to growing maple, birch, gum, and basswood for Model T floorboards and body frames.

In its quest for self-sufficiency, Ford Motor Company bought vast forest reserves on the rugged Upper Michigan Peninsula some 500 miles northwest of Detroit, and constructed a plant there, at Iron Mountain, in 1920. Ford grew its own trees, cut its own timber, ran its own sawmill, and cut and formed its own wooden body parts.

But no matter how many Lizzies the assembly lines turned out, they never seemed to exhaust the company's forests. Typically, Henry wasted nothing: even sawdust and leftover wood pieces were turned into Ford Charcoal Briquets. It was almost inevitable that the Iron Mountain operation would be tapped for production of wood station wagon bodies.

Go on to the next page to learn about design and production of the Ford Mercury woody.