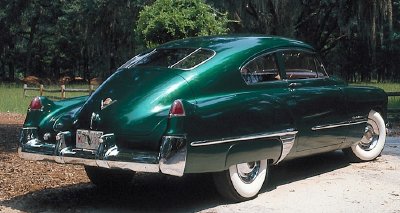 Cadillac for 1948 ignited a styling cue that would come to symbolize post-war American automotive exuberance and, by extension, the post-war optimism and confidence of America itself. Call 1948 "The Year of the Tailfin."

During the war, a skeleton crew of GM designers played with ideas for postwar styling inspired by some of this airplane's design elements: pontoon front fenders, pointed nose, cockpitlike curved windshields -- and tailfins.

This influence would also be seen at other GM divisions. Olds, for example, adopted the P-38's engine air-scoop motif for the headlamp bezels on its 1949 "Futuramic" models. But the fin had the most lasting impact. As Mitchell later said: "From a design standpoint, the fins gave definition to the rear of the car for the first time. They made the back end as interesting as the front, and established a longstanding Cadillac-styling hallmark."

Tailfins were the crowning touch for Cadillac's masterful 1948 design, which was executed by a small team working under Hershey at his farm in suburban Detroit. The traditional Cadillac grille became more aggressive via larger eggcrates, complemented by a more-shapely hood. Roof and fenderlines were curvaceously beautiful from every angle.

Inside was a new dashboard dominated by a huge "drum" housing gauges and controls. This lasted only a year, however, as it was complex and costly to produce. The '49s used a simpler instrument board that echoed the grille shape, a theme that would persist for the next eight years.

Models, body styles, and wheelbases stood pat for '48, though Series 75s wouldn't get their own redesign until model-year 1950 (low production precluded early amortization of their prewar dies).

After years of research and development, Cadillac introduced two dramatic changes in 1949. We'll discuss these next. 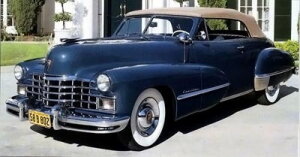 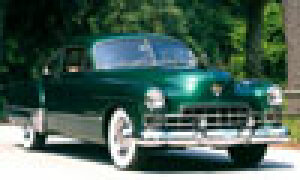