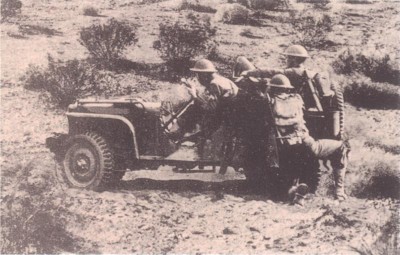 The jeep quickly proved its worth in battle.
©Chrysler LLC

By October 1941, it was apparent that the jeep's versatility and usefulness would far exceed the Army's original expectations. A second source was sought, partly to increase the supply, but apparently largely as insurance against the possibility of sabotage at the Willys plant. And so began the production of both Willys and Ford jeeps.

Bypassing Bantam, Quartermaster General E. B. Gregory sought out Edsel Ford with the unprecedented request that his company manufacture jeeps according to the Willys design-including the Barney Roos "Go-Devil" engine. All parts, Edsel was told, were to be interchangeable between the Willys vehicles and their Ford-built clones.

Edsel Ford agreed without hesitation; and on January 10, 1942, it was announced that a negotiated contract had been made, under which Ford would produce 15,000 GPW (General Purpose Willys) vehicles, to cost $14,623,900.

Willys turned over to Ford its patents, specifications, and drawings -- without compensation, according to one report, although another source indicates that a royalty was paid. In any case, it was an almost unparalleled example of wartime cooperation between two competing firms. Indeed, the agreement may even have been illegal, yet it was considered vital to the war effort.

Incidentally, despite its similarity to the Willys MB, the Ford-built GPW is readily distinguished by its inverted U-shaped front frame cross member. The Willys version, in contrast, uses a tubular brace.

Over at Bantam, meanwhile, President Frank Fenn was understandably furious. In a letter dated March 23, 1942, he wrote, according to historians Denfield and Fry, that he "could not understand how Bantam had been denied a chance to bid when it had performed the major part in the jeep's development. . . ."

Instead of receiving a contract to produce more jeeps, American Bantam built carts to be pulled behind jeeps and other light trucks.
©Chrysler LLC

Fenn went on to say that his company had been first to make the proposal that the standardized vehicle should be built around the best elements of the three pilot models and had wished to share in the building of the car that would result. On the financial side, he said that he had paid Spicer, in the reasonable expectation that Bantam would benefit from the work it was doing, more than $130,000 in tooling costs for axle production. He had, in effect, subsidized Ford's and Willys's production.

Despite Fenn's protests, no more jeep contracts came American Bantam's way. By the time the war ended, Willys had produced 362,841 of the little quarter-tonners, while Ford had built 281,448. Bantam, the firm responsible for starting it all, had been granted contracts for only the initial 2,643 units -- a proverbial "drop in the bucket."

Bantam's final, forlorn hope was that it would be asked to produce the four-wheel-steer jeep, of which eight pilot models had been submitted. But the Quartermaster Corps -- despite pleas from the using arms -- abandoned that proposal, evidently on the grounds that the vehicle's advantages were not sufficient to outweigh the added complexity and the potential service problems in the field.

Given the shaky condition of American Bantam and the limited capacity of its factory, the decision to go with Willys and Ford, however harsh it may seem, may not have been entirely unreasonable. Certainly the product the larger companies produced was a good one. More than that, it became one of World War II's most enduring legends.