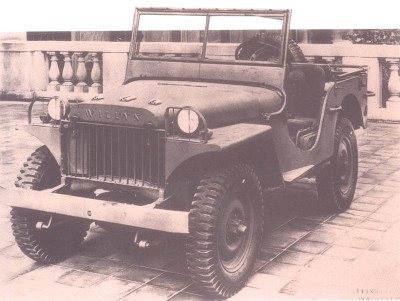 The Willys-Overland new jeep unit, eventually designated the model MA, was an improved and lightened version of the original Quad.
©Chrysler LLC

Because of the jeep's lower weight requirement, Barney Roos went back to work on the Willys jeep design that would eventually surpass the Bantam and Ford models. Almost 75 pounds could have been cut by using a smaller engine -- possibly the Continental unit employed by the Bantam pilot. However, Barney Roos had been told that the most impressive feature of the Willys unit had been its powerful "Go-Devil" engine. So that idea was rejected out of hand.

Roos, a patient, determined, resourceful man, disassembled the vehicle. Every bolt, every bracket was analyzed. Surplus material was cut away wherever possible. Studs, screws, even cotter pins were shortened. The sizes of clamps, nuts, and washers were reduced. The heavy carbon steel frame was replaced by one made of lighter alloy.

Lighter steel was employed for the body and fenders. Finally, the task came down to weighing the paint. It was determined that one coat would have to suffice, for a second would have meant exceeding the weight limit. The final product did meet the Army's specified figure -- with just seven ounces to spare.

Roos also undertook some comparatively minor, yet important modifications to the "Go-Devil" engine. The carburetor and intake manifold were altered slightly to get even better performance on steep grades. To better cope with the mud, sand, and dust encountered in battle, special air cleaners and oil filters were used.

The Willys MA differed from the Quad in many ways, including lower, rounded door cutouts, single piece wheels, and a handbrake on the left.
©Chrysler LLC

Praise was heaped upon Barney Roos. In a statement that appeared to completely overlook the critical work of Probst and the Bantam people, Modern Industry magazine noted, "When the Army handed out specifications of what it wanted, Roos went back to work and, with nothing but an engine around which to build a vehicle, He and his Willys-Overland staff designed a highly specialized job while competitors were struggling to have their existing products approved and their assembly lines kept intact."

With 4,500 jeeps in service, there was ample opportunity to evaluate the respective merits of the three makes. Preference clearly went to the Willys, principally because of its more powerful engine. However, the Willys had other advantages as well, such as skid plates mounted under the motor and transmission, heavier gauge steel in the body, and durable two-piece tubular front steering rods.

On the other hand, there were complaints that the Bantam had "too many bugs." It overheated. The transmission was to be too light for the job; gears soon wore out, and the synchromesh was weak. The windshield wiper was hand-operated; and the battery hanger was too light and required constant welding.

The Ford, meanwhile, was rated a distant third. In the opinion of one of the testing officers, the Ford Pygmy "had the most trouble with the motor, which was designed to work on a governor's speed, and there was considerable bearing trouble." As well, the non-synchro transmission did not win any friends for the Ford.

However, the Bantam and Ford jeep models still had desirable qualities that were included in the standardization of the jeep. Learn more in the next section.