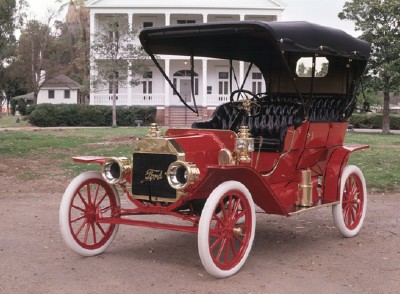 Henry Ford built a fine car in the Model T, using only top-quality materials such as Vanadium steel. The 1909 Touring Car (above) listed at $850 and 7,728 were built. But the genius of Henry Ford -- with help from others, to be sure -- was the moving assembly line that allowed him to control the cost. See more classic car pictures.
©Nicky Wright

It was on October 1,1908, just about a month before William Howard Taft defeated William Jennings Bryan for the Presidency of the United States, that the Ford Motor Company unveiled the little machine that many historians think of as the most significant automobile of all time -- the 1908-1927 Ford Model T.

Henry Ford called it the Model T-hardly surprising since Henry had already run through the alphabet from A to S, though a lot of letters were skipped along the way. It was built only as a touring car at first, but within a few months a number of other body styles would be added to the line. Strictly a utilitarian vehicle, the Ford took no beauty prizes, and it won no speed contests.

Still, its 22-horsepower, four-cylinder engine could propel the 1,200-pound car to a top speed of between 35 and 40 miles an hour, adequate for the mostly unpaved roads of the era. Cooling was by the primitive thermo-siphon method, lubrication via a splash system. The gas tank nestled beneath the front seat, its fuel being fed to the engine by the force of gravity. Meanwhile, the driver shifted the two-speed planetary transmission with foot pedals. The car didn't even have demountable rims at first, though in 1919 they became available for an extra $25.

Widely known as the "Tin Lizzie," the little Ford became the butt of a thousand jokes. But it was this machine, more than all the others combined, that was responsible for putting America -- and ultimately the world -- on wheels. On the strength of the Model T, Ford's yearly production would increase from 10,000 cars in 1908 to nearly two million 15 years later. As early as 1913, in fact, Ford was literally outproducing all the rest of the nation's automakers put together!

On the next page, you will learn about the creation of the Ford Model T.