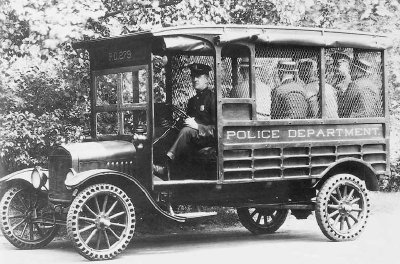 After watching his Model T cars being turned into trucks for several years, Henry Ford finally decided he wanted a piece of the action. So on July 27, 1917, he officially entered the truck business with the introduction of the one-ton-rated Ford Model TT chassis. Now a customer could buy a stripped Model T chassis for light-duty commercial work or a heavier-duty Model TT version for bigger jobs.

1917 was also noteworthy for two other events: the introduction of the Fordson tractor, and the birth of Henry's first grandson, Henry Ford II. HFII, as he would later be known, was the son of Edsel, who had been born to Henry and his wife Clara in 1893.

A Model T-based paddy wagon shows off an interesting type of tire used in the Teens. Though pneumatic tires were fitted to most cars by this time, many trucks had solid rubber tires on the rear to allow for higher load capacity. But these produced a brutally jolting ride, so some were "ventilated" with holes that went all the way through -- from sidewall to sidewall -- allowing the tread to flex a bit. Notice the rear tires are compressed somewhat at the bottom.

During Ford's 1918 model year, Edsel Ford took over as president of the Ford Motor Company when his father relinquished that position, though there's little question Henry still exerted a lot of influence.

Also during this time, some Ford plants were converted over to produce war materiel. Ford built a number of Model T ambulances for shipment to France, and opened a new plant to build submarine-chasing Eagle Boats.

During World War I,

The first Ford chassis built expressly for truck duty arrived in 1917. Still based on Model T mechanicals but rated at one-ton capacity, it included a stronger frame and worm-gear differential along with solid rubber rear tires.

This 1918 Ford truck hosts a canopy-covered passenger compartment with weather protection, along with a stake-bed body.

A one-ton truck chassis listed for $600 in 1918, significantly more than a standard Model T chassis, which sold for just $325.

Ford fitted this late-Teens Model T with a cargo box for the company's own use. A number of outside suppliers offered similar conversions.

The end of World War I on November 11, 1918, helped make 1919 a very good year for the Ford Motor Company. It brought the three-millionth Model T, along with the birth of Edsel's second son, Benson.

1919 also saw construction start on the expansive Rouge River complex, which would eventually grow to become a nearly self-contained megafactory. Ford closed out the Teens as the country's undisputed sales leader, having produced nearly half of all vehicles sold in 1919.