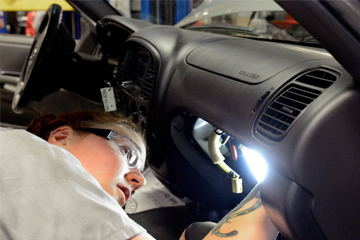 A recall occurs when a manufacturing defect or quality issue becomes apparent in a product. To qualify as a recall, the flaw in the product has to be a safety issue for its users, and it can be caused by any part of the product, or by the way the product has been designed or put together. Children's toys and contaminated food are two commonly recalled categories. So, cars aren't the only products that get recalled, but the severity of a recall on a popular car model means that it'll probably be in the news a lot. Depending on how an auto manufacturer chooses to handle a recall situation, the company can come out looking like a hero, or a villain. In short, it's true that auto manufacturers can often ignore a known defect for a while. But that doesn't mean they'll get away with it forever. Let's explain.

A car manufacturer usually, but not always, becomes aware of a quality control problem fairly quickly. Generally, people come into the dealerships' service centers with similar mysterious symptoms. Once the data starts to pile up, the car company takes a look at the situation and tries to figure out what went wrong, and how to fix it. Then, they have two choices: they can issue a voluntary recall, alerting owners of the affected cars to go to their nearest dealership and have it fixed for free. Or, they can hope the problem just goes away.

The problem never really goes away. Instead, the government steps in. The National Highway Traffic Safety Administration (NHTSA) is the government agency that keeps an eye on automotive quality and safety issues. If you own a car with what you believe is a safety-related defect and you think the people at your dealership's service center aren't taking it seriously, the next step is to contact the NHTSA. The NHTSA looks at every single complaint they receive, but there's no set criteria for a full investigation; it's taken on a case-by-case basis. The more complaints the NHTSA receives about a specific issue, though, the more likely they are to investigate. If the NHTSA discovers that the car doesn't meet minimum federal safety standards, or that there is a safety flaw related to the car's manufacturing, the government can force the car company to issue a recall.

So why would an auto manufacturer come forth and issue a voluntary recall if there was a chance they could get away with it? After all, automotive recalls are so common that most people don't dwell on them [source: Gorzelany]. It's because it's in the manufacturer's best interest to get defective cars off the road and fixed before they cause crashes, injuries or deaths. And if the government discovers that the manufacturer tried to hide the flaws or was otherwise dishonest about recall-worthy safety issues, the company can face criminal charges, hefty fines and tons of unflattering headlines.