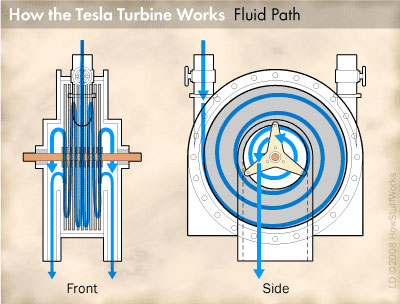 You might wonder how the energy of a fluid can cause a metal disk to spin. After all, if a disk is perfectly smooth and has no blades, vanes or buckets to "catch" the fluid, logic suggests that the fluid will simply flow over the disk, leaving the disk motionless. This, of course, is not what happens. Not only does the rotor of a Tesla turbine spin -- it spins rapidly.

­The reason why can be found in two fundamental properties of all fluids: adhesion and viscosity. Adhesion is the tendency of dissimilar molecules to cling together due to attractive forces. Viscosity is the resistance of a substance to flow. These two properties work together in the Tesla turbine to transfer energy from the fluid to the rotor or vice versa. Here's how:

The thin layer of fluid that interacts with the disk surface in this way is called the boundary layer, and the interaction of the fluid with the solid surface is called the boundary layer effect. As a result of this effect, the propelling fluid follows a rapidly accelerated spiral path along the disk faces until it reaches a suitable exit. Because the fluid moves in natural paths of least resistance, free from the constraints and disruptive forces caused by vanes or blades, it experiences gradual changes in velocity and direction. This means more energy is delivered to the turbine. Indeed, Tesla claimed a turbine efficiency of 95 percent, far higher than other turbines of the time.

But as we'll see in the next section, the theoretical efficiency of the Tesla turbine has not been so easily realized in production models.

The Boundary Layer: It's a Real Drag

The boundary layer effect also explains how drag is created on an airplane wing. Air moving over the wing behaves as a fluid, which means air molecules possess both adhesive and viscous forces. As air sticks to the wing surface, it produces a force that resists the forward motion of the aircraft.