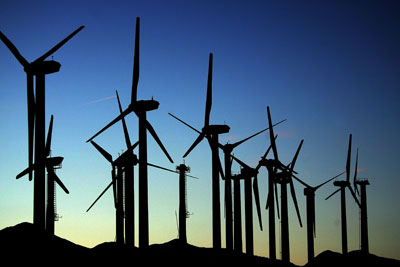 Wind turbines, like these in Palm Springs, Calif., are examples of other turbines being used to generate electricity. Unlike Tesla's model, these are bladed turbines.
David McNew/Getty Images

The job of any engine is to convert energy from a fuel source into mechanical energy. Whether the natural source is air, moving water, coal or petroleum, the input energy is a fluid. And by fluid we mean something very specific -- it's any substance that flows under an applied stress. Both gases and liquids, therefore, are fluids, which can be exemplified by water. As far as an engineer is concerned, liquid water and gaseous water, or steam, function as a fluid.

At the beginning of the 20th century, two types of engines were common: bladed turbines, driven by either moving water or steam generated from heated water, and piston engines, driven by gases produced during the combustion of gasoline. The former is a type of rotary engine, the latter a type of reciprocating engine. Both types of engines were complicated machines that were difficult and time-consuming to build.

Consider a piston as an example. A piston is a cylindrical piece of metal that moves up and down, usually inside another cylinder. In addition to the pistons and cylinders themselves, other parts of the engine include valves, cams, bearings, gaskets and rings. Each one of these parts represents an opportunity for failure. And, collectively, they add to the weight and inefficiency of the engine as a whole.

Bladed turbines had fewer moving parts, but they presented their own problems. Most were huge pieces of machinery with very narrow tolerances. If not built properly, blades could break or crack. In fact, it was an observation made at a shipyard that inspired Tesla to conceive of something better: "I remembered the bushels of broken blades that were gathered out of the turbine casings of the first turbine-equipped steamship to cross the ocean, and realized the importance of this [new engine]" [source: The New York City Herald Tribune].

Tesla's new engine was a bladeless turbine, which would still use a fluid as the vehicle of energy, but would be much more efficient in converting the fluid energy into motion. Contrary to popular belief, he didn't invent the bladeless turbine, but he took the basic concept, first patented in Europe in 1832, and made several improvements. He refined the idea over the span of almost a decade and actually received three patents related to the machine:

In the first patent, Tesla introduced his basic bladeless design configured as a pump or compressor. In the second patent, Tesla modified the basic design so it would work as a turbine. And finally, with the third patent, he made the changes necessary to operate the turbine as an internal combustion engine.

The fundamental design of the machine is the same, regardless of its configuration. In the next section, we'll look more closely at that design.