Could we power all cars entirely from wind power? 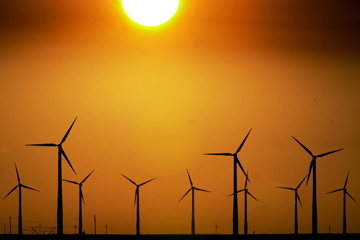 Image Gallery: Renewing the Grid A group of wind turbines are silhouetted by the setting sun on a wind farm near Montezuma, Kan. See pictures of renewing the grid.
AP Photo/Charlie Riedel

To answer this question, we have to stop thinking about energy as a straightforward commodity -- something to be produced and consumed. Instead, think about human behavior, driving patterns and habits and about the vagaries of wind and weather. Then think about how all of these factors will mix together and balance out the power that can actually be produced by wind and when and how that will be used by drivers.

If you've given it some thought, then the answer you likely arrived at is, "no." And you'd be right -- at least to a degree. The full answer lies, as said, in many variables. So, as you'll see, it's possible (yet unlikely), that someday the answer could be, "yes."

The issue of cars powered by wind electricity is less one of supply and demand, and more one of sociological and cultural shifts in habits and thinking. Going from miles per gallon to kilowatt hours per mile means more than plunking a battery where the gas tank used to be. It's about changing driving habits, travel habits and even our concept of working and commuting. But when (and if) these cultural traditions are changed, wind power would still come up short on supply. Sure, it could generate the necessary power, but only if there were enough wind farms and only if there were enough ways to distribute the power -- if and if and if. But the wind is a fickle beast, despite modern forecasting techniques. Wind is seasonal, wind is dependent on storms and wind is variable and changeable -- much more so than human behavior.

But it is possible that wind could become one part of a portfolio of alternative energy resources that could someday replace more traditional coal, natural gas and oil electricity plants. Keep reading to find out why wind can't power a national fleet of cars, but may work well as one tool in a larger toolbox of energy sources waiting to make the United States a greener and more fuel-efficient country. 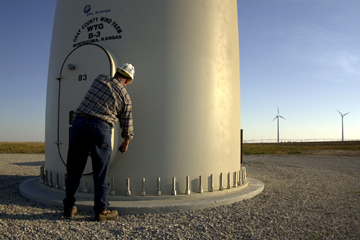 Project supervisor Rusty Hurt opens a door at the base of one of the wind turbine towers in Montezuma, Kan. The wind farm contains 170 of the 289-foot-tall towers and can generate enough electricity to power 40,000 households.
AP Photo/Charlie Riedel

Massachusetts Institute of Technology (MIT) professor Stephen Connors has been studying the interaction of alternative energy and electricity generation since before the term global warming entered the common language.

Currently, most electricity is produced with the use of steam turbines fired through gas, coal or petroleum. Rather than allow the turbines to idle overnight companies keep the generators turning throughout the dark hours, which produces a huge surplus of electricity -- even at reduced capacity -- when people need it the least. Unless, of course, you're an electric vehicle (EV) owner plugging into the grid overnight, then the surplus generation and consequently lower price works to your advantage.

However wind power does not follow this pattern. Instead wind power is reliant less on a predictable clock and more on weather patterns -- only somewhat predictable and not following human patterns.

"There's quite a mismatch in patterns with charging electric vehicles and when wind energy becomes available," Connors said.

Connors said the best time to produce wind energy is in the winter months, when winds are often at their strongest. Within the larger seasonal patterns are day-to-day patterns, too, varying in each weather region of the country. These are the trends that dictate the more immediate wind energy production. In essence, wind can supplement an EV fleet's electrical needs but cannot be the only source based on the seasonal and regional patterns that supply the wind necessary to produce the energy.

Wind Power Alone is Not Enough 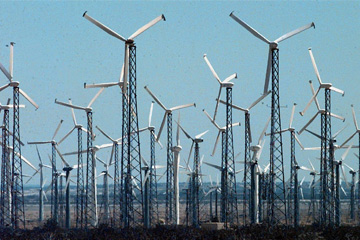 Powering the country's car fleet by wind power takes into account a lot of assumptions. First and foremost is the assumption the fleet would be electrically powered. According to governmental and private sources this would be a feat in and of itself.

But even if this scenario came to pass, which Connors and others believe to be unlikely until at least 2050, the numbers are still daunting.

Current figures put the United States consumption of gasoline for travel at about 400 million gallons (1.5 million liters) per day. An electric car, with today's modern technology behind it, requires roughly 40 kilowatt hours to achieve the same distance as a car averaging about 15 miles per gallon (6.4 kilometers per liter).

These numbers are rough estimates and do not take into account terrain, automotive efficiency and a host of other factors. They do point to a larger picture, however, as the country's electricity producers would need to create about 16 trillion kilowatt hours of energy per day to achieve roughly the same energy level as produced by the gasoline consumed in the same period.

On a more personal scale it's estimated that one car uses about 500 gallons (1,893 liters) of fuel each year. Based on the same number of 40 kilowatt hours per gallon, one car would require about 20,000 kilowatt hours of energy each year to commute a conservative 10,000 miles (16,093 kilometers). In 2006, the U.S. Department of Transportation estimated the number of passenger cars at about 251 million. Crunch the numbers and the final tally is another daunting figure. But then the total amount of electricity produced in the United States through all sources in 2007 was more than 4 trillion megawatt hours [source: U.S. Energy Information Administration]. And one megawatt hour is equal to 1,000 kilowatt hours.

In essence, the country could shift to electric vehicles to meet demand, but not through wind power alone. Instead, it will take a larger portfolio of renewable energy to accomplish the task.

How Will Wind Help? 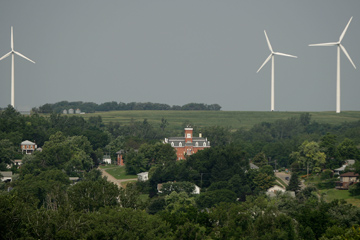 While it is affected by seasonal variations, wind can become a source for clean, renewable energy.

Both use modified airfoil designs to capture the wind as a motive force to spin the turbine. As they spin, they generate electricity. This electricity is either used directly as a supplement to a larger system or captured and stored.

While having this advantage, the number of wind farms (or banks of turbines), is relatively small at this point in time.

Connors, like many other energy scientists, says wind-powered electricity would be used as part of a larger package of renewable energy sources including geothermal, hydro, solar and biomass. Nuclear power is often added to the list as it's a carbon-free energy source.

This portfolio will likely co-evolve with the growing number of electric vehicles, as well as a growing technology base including the proposed "smart" electrical grid, which will shunt surplus electricity to where it's needed most, based on real-time demand calculations.

But even then, Connors said he was looking at the year 2050 (at least) for an all-electric vehicle fleet given a Moses scenario. A Moses scenario, he said, was an ideal set of circumstances where government regulations, policy and public opinion all aligned allowing for a smooth, seamless trip to a future promised land.

"It doesn't happen often," he said. In fact, he used hybrid cars as an example. The first commercially available hybrid, the Toyota Prius, hit U.S. markets about 10 years ago. Only now, more than a decade later, are they becoming commonly available as a car option. And given the fact it takes anywhere from 15 to 20 years for the country's auto fleet to fully shed older models for new, as well as the lack of commercially viable and accepted electric cars, 2050 would be an ideal date but not one likely to be reached.

For now it looks as if wind will move more trees than cars -- but that may change in the distant future.

For more information about renewable energy sources, follow the links on the next page.