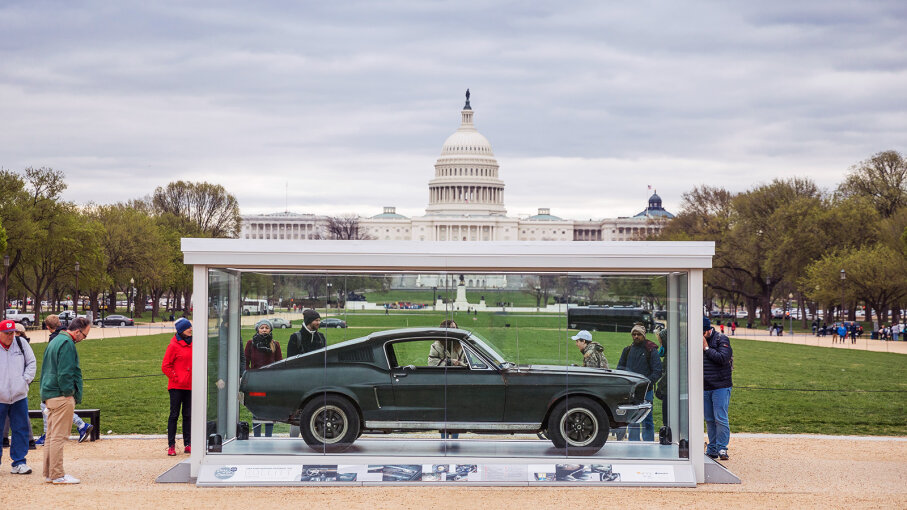 The original 1968 Ford Mustang driven by Steve McQueen in the film "Bullitt" was on display at Cars at the Capital exhibition in April 2018. The famed Mustang is one of the 24 cars listed on the National Historic Vehicle Register. HVA

Think Steve McQueen's original "Bullitt" Mustang and the first Plymouth Voyager minivan have nothing in common? Think again. Both are actually on the elite roster known as the National Historic Vehicle Register. Never heard of it? You're not alone. It's like the National Register of Historic Places, but instead of recognizing places, this registry recognizes cars.

In 2013, the Historic Vehicle Association, a government agency whose goal is to "preserve and celebrate the stories of our nation's most significant vehicles," joined with the U.S. Department of the Interior to create the National Historic Vehicle Register to recognize and archive "significant historic automobiles within the Library of Congress." There are currently 24 vehicles listed.

Every April, the Historic Vehicle Association hosts an exhibition called Cars at the Capital, which brings a rotation of several of these cars to the National Mall in Washington, D.C. Among the cars in 2018 were the original 1968 Ford Mustang driven by McQueen in the film "Bullitt"; the 1985 Modena Spyder Ferrari from "Ferris Bueller's Day Off"; a 1927 Ford Model T; a 1918 Cadillac U.S. 1257X; and the very first 1984 Plymouth Voyager minivan.

For most of us, the Cars at the Capital exhibition is the only way to get up close and personal with these automobile examples of American history. That's because all of the cars are privately owned. Some are on display in museums around the country, so exhibiting them is up to each owner's discretion. The National Historic Vehicle Register website will note where one of the cars is being publicly exhibited so people can check them out.

The McGee Roadster, a 1932 Ford V8 (left) and the Gypsy Rose, a 1964 Chevrolet Impala (right) were exhibited at Cars on the Capital in 2017. Both cars are also listed on the National Historic Vehicle Register.
HVA

And given there are just 24 cars on the National Historic Vehicle Register, how they are selected is a stringent process. Let's take a closer look.

Vehicles must demonstrate "an undeniable relationship to the history of the U.S." and meet at least one of the four criteria of significance:

According to Casey Maxon, a historian at the Historic Vehicle Association, once those four criteria are met, vehicles are also considered for "any important anniversaries or other current events that will help create buzz and encourage public attention to automotive history."

"Cars are chosen by our staff with input from a number of HVA advisers within academia, the museum and collector car community, as well as experts in restoration, preservation and conservation," Maxon said via email.

The Library of Congress archives material related to the Register, to make it easy for the public to access.

Once a vehicle is chosen for the Register doesn't mean all makes of same model year are on the list as well. In other words, President Ronald Reagan's 1962 Willys "Jeep" CJ-6 is one of the 24, but not every 1962 Willy CJ-6 is listed.

Between five and 10 vehicles are chosen each year, and once a vehicle is selected, the real (and really expensive) work starts. Each new vehicle is thoroughly documented, which includes extremely detailed photography, a written report that outlines its history and includes any historic images, scale drawings based on data from a laser scan, and a short documentary film. These guidelines are based on those used by the Historic American Engineering Record.

The documentation is usually completed at the Historic Vehicle Association's National Laboratory, but is sometimes completed at a location that is relevant to the vehicle. Compiling this documentation requires a significant fundraising effort. The Historic Vehicle Association has several funding partners that are relevant to the automotive industry, and additional funding is sought for big projects.

So far the list is mostly American cars, but a few built outside the U.S. that have had an impact on American culture are included. The list features a 1938 Maserati, a 1954 Mercedes-Benz and, of course, that 1985 Modena Spyder Ferrari from "Ferris Bueller's Day Off."

If you want to see your own collector car documented alongside film stars and groundbreaking minivans, you might be disappointed. Currently, the National Historic Vehicle Register does not accept public submissions.

Now That's Interesting
According to Casey Maxon, the Historic Vehicle Association has quite a network of people with various areas of expertise in the vintage and collector car worlds. Maxon also noted that the group maintains a database of vehicles that meet the criteria but, for whatever reason, were passed over in favor of other vehicles.