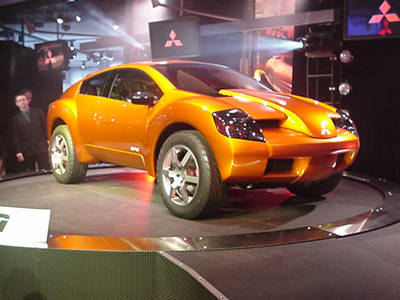 After the laser-light show finished and the smoke disappeared, Mitsubishi's exciting, new concept vehicle rolled out of a side door and onto the stage at this year's North American International Auto Show. Classified as a multi-activity vehicle, this day-glow metallic-orange vehicle looks ready for some serious off-road racing. And it should, considering that the vehicle's design was inspired by the car company's rally racing team.

The racing influence carries over to the interior of the car, where you'll see a race-car inspired roll-cage and 4-point safety belts. The four-passenger RPM 7000 features extensive use of carbon-fiber. Also, the ignition and switches have all been designed for a driver wearing racing gloves.

While the car is built for tough driving conditions, it certainly doesn't lack for high-tech components. The vehicle features a touch-screen monitor that can be used to control the climate system and music system, the latter including a CD-player, satellite radio signals and MP3 files.

Underneath the Formula-One-inspired nose-cone hood is a 2.0 liter, DOHC, 4-cylinder engine featuring a twin-intercooled turbocharger. This engine can produce 315 horsepower at 6,500 RPM.