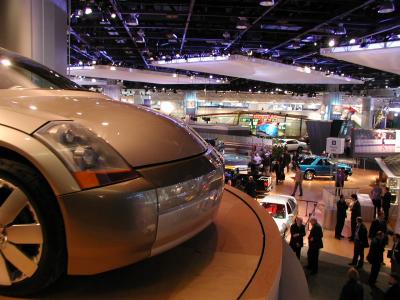 The view from the second floor of GM's exhibit, which is the largest at the show.

We're here at the 2001 North American International Auto Show and it is amazing. The show is in Cobo Hall in Detroit, on a 750,000 square-foot show floor; but there are double- and even triple-decker exhibits that add an additional 106,000 square feet to the total area. (That's more than 20 acres of exhibits!)

These exhibits use enough carpet, hardwood and tile for 600 homes, and the lighting during the show will use as much energy as a 360-home subdivision uses in six months. The total value of the 500-plus cars here is more than $200 million!

Some of the cars we'll show you are concept cars. These cars will probably never make it to production, but certain features may show up in future cars produced by these automakers. Others are cars that are headed for production, but not for a year or two. Each unveiling is a huge production.

The huge set used to display the new Jeeps this year.
There are more than 5,000 journalists here at the show, all clambering for a good photo or interview. Believe it or not, there is a car under there.

A good bit of this show is about drama and presentation. For example, Daimler Chrysler debuted the Jeep Liberty SUV by driving it down a steep, rock-covered incline with a waterfall as a backdrop on the huge stage.

Ford VP of Design J. Mays unveiled the Ford Forty-Nine concept car to the singing of a 45-person church choir.