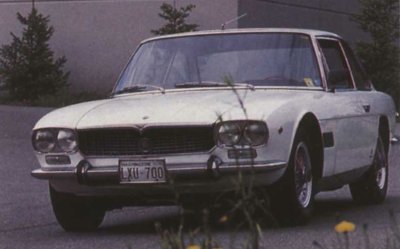 Mexico 2 + 2 rode a shortened version of the chassis developed for Maserati’s 1963 Quattroporte sedan, was essentially its two-door counterpart.

The road that lead to the Maserati Mexico was long and winding. In 1965, Maserati could look back on two decades of steady improvement and steadily increasing success in road cars. While more grand tourer than pur sang sports machine, they were still Maseratis, and thus exciting, entertaining, and eminently desirable.

But it was time to move on in ’65. Maserati’s twincam six had done yeoman service, but was at the end of its development life. Then too, more powerful new V-12 models from Ferrari and upstart Lamborghini represented a competitive challenge that Maserati’s pride could not allow to go unanswered.

As with the six, the answer again came from competition. Nine years before, Maserati had fielded a massive and brutishly powerful 90-degree twincam V-8 for the 450S sports-racer, then went on to apply it to the equally famous Type 165 and Type 65 two-seaters of the early Sixties. A detuned version of this 5.0-liter engine had also powered a small run of roadgoing 5000 GTs (31 built) in 1959-64.

Chief engineer Giulio Alfieri set about “productionizing” the V-8 for Maserati’s new-generation road cars of the late Sixties and beyond (changing, for example, the cam drive from a train of gears to a simple chain). Its first roadgoing application was Maserati’s first sedan, the aptly named Quattroporte (four-door) of 1963.

With a 3.5-inch shorter wheelbase, the QP chassis served as the foundation for a new close-coupled four-seat coupe, unveiled at the 1965 Turin show as the Maserati Mexico. Much more complex than any previous Maserati design, its chassis retained the classic front-engine/rear-drive layout and still took much of its strength from large-diameter tubular members, but was further stiffened with several boxed and fabricated steel sections.

In its first two years, the Quattroporte had used a De Dion rear suspension, then reverted to an orthodox live axle on semi-elliptic leaf springs. The latter was retained for the Mexico, along with Maserati’s usual coil-and-wishbone front suspension, recirculating-ball power steering, and all-disc brakes.

The V-8 was large and beefy enough to accommodate displacements of 4.2 to 4.9 liters. In initial Maserati Mexico guise it was sized at 4.7 liters and delivered 290 horsepower, good for a top speed of over 155 mph. Together with a solid chassis and capable road manners, it made the Mexico one very fast and very desirable GT.

Alas, you wouldn’t know it from the Vignale styling, which was obviously Italian but rather bland. Overall, the Maserati Mexico resembled a somewhat larger Sebring with most of the character removed.

The Maserati Mexico's vignale styling is neat if a tad bland for a Latin exotic.

Which explains why it was overshadowed for sheer beauty and sex appeal by other period supercars, including Maserati’s own Ghibli (see entry) -- which in turn perhaps explains why it didn’t sell as well as Maserati hoped. Historians tell us that most Mexicos went to France and Switzerland. A few landed in Italy, fewer still in the U.S. Certainly none went to Mexico!

In fact, the Maserati Mexico virtually disappeared after its erstwhile replacement, the shapely Vignale-designed Indy, came along, but remained in the catalog all the way through 1973, though production was miniscule after 1968. A 4.1-liter option with “only” 260 bhp was instituted the following year, mainly to position the car downmarket from the Indy and Ghibli.

As with most “facts” concerning Italian specialty marques, it’s wise to be cautious about production figures. Several respected sources claim the total was 250 units, while another lists 468. Is the latter more nearly correct?