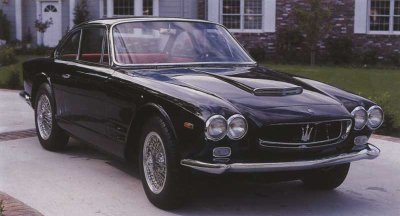 The Maserati Sebring attempted to build on the sucess of earlier models. Having earned its stripes in the 1950s as a GT power to be reckoned with, Maserati entered the 1960s intent on expanding this success. With two new models, it would do just that. First to arrive, and our subject here, was the Maserati Sebring, introduced at Geneva in 1962.

It combined all the best, newly developed elements of the 3500GTI with more comprehensive equipment and stylish new 2 + 2 bodywork shaped and supplied by Vignale.

Designer Giovanni Michelotti was still associated with Vignale in those days, so it wasn’t surprising that this new notchback coupe looked much like his TR3A-based Triumph Italia being built at the same time. Highlights included quad headlamps, a rectangular mesh grille bearing the famed Maserati trident, a pair of functional air vents behind the front wheelarches just above the rockers, and a straight-through fenderline linking headlamp pods and taillight clusters. B-pillars were raked to match A-pillar angle, glass area was generous, the tail neatly cropped.

Options proliferated, mainly with the American market in mind. Air conditioning and automatic transmission were new -- and unheard-of -- in a Maserati. Special paint, wire wheels, and radio were also offered.

Beneath this relative luxury was an improved version of the 3500GTI spider chassis with a shorter, 98.4-inch wheelbase. It was more rigid than before, but only an Italian automaker would have bothered with such a labor-intensive design comprising multiple tubes, pressings, stiffeners, and brackets.

The Maserati Sebring featured a powerful 6-stroke engine which, while

A total of 444 Sebrings, all with the same Vignale bodywork, were produced in two series between 1962 and ’66. Series I models used the GTI’s 235-horsepower twincam six. Most Series II examples, all of which were built in 1965-66, carried a 245-bhp, 3694-cc enlargement, though a few had an even larger 4.0-liter, 255-bhp extension. Both these engines were also used in the contemporary Mistral (see entry).

In its most potent form, the Sebring could touch 150 mph flat out. Alas, that wasn’t enough to keep pace with Ferrari’s new-generation V-12s and new V-8 models from Maserati itself. But the GTI platform wasn’t finished yet: the Mistral had blown in, and it was no ill wind.