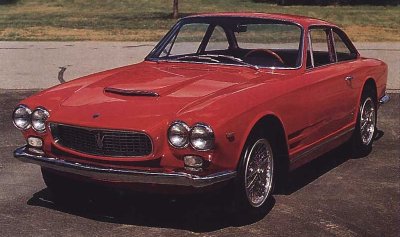 Maserati’s first real challenge to Ferrari was the understated but highly capable 3500GT. It came as the 2+2 coupe pictured or as a two-seat convertible on a shorter wheelbase.

The Maserati 3500GT shook up the world of sports cars. By the late 1950s, everyone knew a sports car looked like a Jaguar XK 140 or an MGA. But there was another species, one less obviously racy, more scarce, very costly, and quite self-assured: the Maserati 3500GT.

The Maserati brothers started building racing cars in the 1920s, and for four decades their trident was a force from the Grands Prix of Europe to the bricks of Indianapolis. In 1957, Juan Manuel Fangio won his fifth Formula 1 Championship in a Maserati. The brothers had by then sold out to deeper pockets (and continued racing by founding OSCA), but Maserati’s new owners developed money problems of their own and sought a cure through “volume” production of sporting road cars.

The 3500GT was actually the third Maserati streetmachine; about 140 others had trickled out since World War II. But it was the first to match the benchmark Ferrari in prestige and performance, and it did so with little fanfare and no lack of confidence. Motor Life’s Wayne Thoms gained a new perspective driving a 3500GT coupe around Beverly Hillsin 1961. “The Maser embodies the secret of a modern classic, a design so handsome, so simple, that it blends unobtrusively with whatever surrounding is at hand,” he wrote. “[I]t was a pleasant thing, driving an extremely expensive, extremely rare, highly sporting machine without feeling obligated to win two or three stop light drags every mile.”

Aside from the engine, little about the car was extraordinary, but the blend worked exceptionally well and was wrapped in elegant coach-work. Buyers could choose a 2+2 coupe from Touring of Milan or a convertible by Vignale of Turin on a two-inch shorter wheelbase. Both used a chassis of steel tubes and panels that was unadventuresome but sturdy. There were coil springs in front, a live axle and leaf springs in back. Front disc brakes and a limited-slip differential were options after 1958, but rack-and-pinion steering never arrived.

Underhood was the real treat: a detuned Maserati sports-racing engine. The all-aluminum twincam inline-six had hemispherical combustion chambers and twin spark plugs. It drove through a four-speed ZF gearbox, with a five speed optional from 1960 and standard from ’61. The trio of Webers eventually was supplanted by Lucas mechanical fuel injection, bringing another 15 hp and a GTI badge. The 3500GT was followed by a long line of Maserati GTs, but none approached its understated self-assurance.