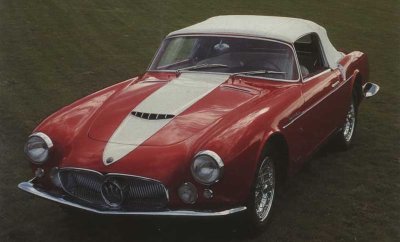 An outside look at an A6G/2000 with spider bodywork by Frua. It’s clearly a mid-Fifties design, most evident in the modestly wrapped windshield.

Although still more interested in and involved with race cars, Maserati was sufficiently encouraged by the success of its first “production” model, the A6/1500, to plan a successor. In retrospect, the new A6G series was a long way from Maserati’s first supercar, the 3500, but was definitely a step in the right direction.

Actually, there were two Maserati A6G series in 1951-57. Both used an evolution of the A6 chassis, a simple, robust tubular assembly spanning a 102-inch wheelbase. They also had six-cylinder engines. The difference is that the later Maserati A6G/2000 had a very different twincam engine.

It was generally agreed, even within the Orsi family, that any A6 replacement would need better handling and more power, if only to keep pace with Ferrari. Accordingly, the Maserati A6G received a modified rear suspension with leaf instead of coil springs (it was good enough for Enzo), and a larger 1954-cc engine with 100 horsepower versus the previous 65. The latter retained the previous opposed valves and single overhead camshaft. Body choices were greatly expanded to include cabriolets by Pietro Frua and coupes by Frua, Pinin Farina, Alfredo Vignale, and the occasional Ghia and Bertone one-off.

Despite all this, buyers waited still more. At a time when twincam Masers were competing successfully against Ferraris on the track, the single-cam Maserati A6G had nowhere near the performance of Ferrari’s roadgoing V-12s. Thus, after a mere 16 A6Gs, Maserati hustled out the improved A6G54 or A6G/2000.

The “54” in the factory designation stood for introduction year, but the real significance was in the “2000” title, for it signalled that Maserati’s first roadgoing twincam engine was ready at last. This wasn’t a return to the Thirties 6CM unit or even a twincam conversion of the existing single-cam six. Rather, it was nothing less than a detuned version of Maserati’s already famous Formula 2 powerplant. Its bore/ stroke dimensions were different from the sohc engine’s, giving exact capacity of 1985 cc. At a rated 150 bhp even in “low-output” form, it was a far cry from the 65-bhp engine of just a few years earlier. The basic Maserati A6 chassis was retained, and though it had to cope with two-and-half times the power in the 2000, it was well up to the job.

The Maserati AG6/2000 bowed at the 1954 Paris Salon, with first deliveries of what was definitely a 120-mph roadgoing Maserati commencing in the spring of 1955. Considering its high price and Maserati’s still-primitive manufacturing facilities, the firm did well to sell 61 of these cars in three years.

The interior of the Maserati A6G was at once modest and aesthetically pleasing.

Here, too, coachwork was farmed out to various carrozzeria (again, it was good enough for Enzo). A skim through factory records shows that all 2000s built were two-seat coupes and spiders. Among participating coachbuilders were Frua, Zagato, and Allemano but not Farina, at least on this occasion.

Sad to say, time quickly caught up with the quickest roadgoing Maserati to date. By 1957, the firm’s racing program had produced much-modified and much more powerful 3.5-liter twincams, while a new V-12 and V-8 were on the way.

But so was a new grand touring Maserati, one that truly deserved those oft-abused GT initials. With the 3500, Maserati would move to the front ranks of high-performance Italian road cars.