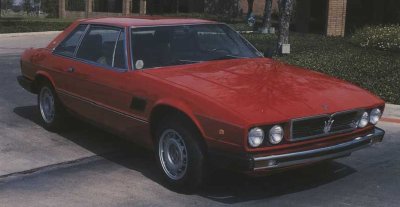 The front of this Maserati Kyalami displays the slightly reworked nose and restyled wheels used on late examples.

It was the first -- and so far only -- ”badge-engineered” supercar, but the Kyalami had a genuine Maserati heart. To understand why, you have to go back to the early Seventies and the De Tomaso Longchamp.

Alejandro de Tomaso had produced the mid-engine Pantera (see entry) with Ford’s help and encouragement. The next of his Dearborn-powered cars appeared at the end of 1970. This was the Deauville, a shapely four-door sedan with front-mounted Ford V-8 and Ghia styling much like that of the Jaguar XJ6, which it also aped in size. The Longchamp arrived two years later on a shortened version of this platform, with trim notchback coupe styling by Frua emulating the lines of Mercedes’ SL.

In 1975, De Tomaso took over Maserati after Citroën had decided to solve one of its many financial problems of the time by abandoning its erstwhile Italian partner. In an effort to boost Maserati sales while saving time and money, Alejandro decided to spin off his two “copycat” cars into restyled variants with Maserati power. The respective results were a “new” Quattroporte and the Kyalami, named for South Africa’s famous Grand Prix circuit.

Predictably, the Kyalami shared the Longchamp’s simple, all-steel unit body/chassis structure and square-rigged Frua styling, but got a reworked front with quad headlamps and a typical Maserati grille, plus minor rear-end changes. The Longchamp’s all-independent suspension, which naturally differed from previous Maserati setups, was also retained, but the Italian twincam V-8 was installed instead of the physically similar 351 Ford.

De Tomaso was already using the ZF 5-speed gearbox Maserati specified for the Khamsin, so this was retained, but not its optional Borg-Warner automatic, which gave way to Chrysler TorqueFlite (replacing the Longchamp’s Ford transmission). The upshot of all this was that De Tomaso had two very similar 2 + 2s that effectively competed with each other.

In an apparent effort to distance the new hybrid from the 4.9-liter Khamsin, the first 100 Kyalamis carried the 4136-cc V-8, with a rated 255 SAE net horsepower giving a top speed of “only” 147 mph. The big engine became optional in 1978, this time with 280 bhp (SAE net), and both sizes continued for the rest of the car’s career.

Despite De Tomaso’s intentions, Maserati customers never took to the Kyalami. The thoroughbred Maserati engine was a big plus over the Longchamp’s American iron in both performance and prestige, but most buyers understandably viewed the car itself as a half-breed. Production wound down in early 1983 after only 150 units, and the Kyalami quietly faded away in favor of the first “mass-market” Maserati, the very different Biturbo sports sedan.