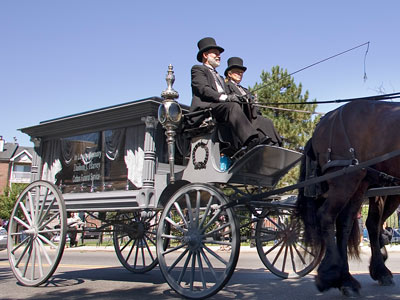 A horse drawn hearse carries a casket to the graveyard in Newark, N.J. Looking at this photo, it's easy to see why hearses have always been considered a little spooky and mysterious.­
AP Photo/Tim Larsen

It's hardly surprising that hearses figure prominently in scary stories and local myths. What's surprising is that one of these myths -- an urban legend, really -- concerns a well-known attraction at Disneyland, in Anaheim, California. Or maybe it's not so surprising after all, given that the attraction in question is the Haunted Mansion.

Disney's Haunted Mansion is a ride that takes the visitor through, as the name implies, a haunted house. There are lots of fun details for the visitor to look at, including one outside of the attraction: an old-fashioned horse-drawn hearse that sits ominously in the mansion's

arose that the hearse chosen by the Disney Imagineers was the same hearse used at the 1877 funeral of Brigham Young, a prominent figure in Mormonism and former president of The Church of Jesus Christ of Latter-day Saints. Young is an important figure to Mormons and it would be very odd, to say the least, if his hearse ended up at Disneyland.

And, in fact, it isn't Brigham Young's hearse at all -- although this urban legend is a persistent one. Snopes.com, the popular urban legend-debunking site, points out that this hearse can't possibly have been used at Young's funeral, mainly because there wasn't a hearse at Young's funeral! His casket was hand-carried by pall bearers to its final resting place. Nobody, however, seems to know where the hearse at Disneyland came from, although it does seem to be a genuine 19th century hearse.

Some other hearse legends:

People who live in the northern section of Summit County, Ohio, claim that if you get too close to a house on a local dead-end street, an old man in a hearse (presumably a ghost) will chase you down a dirt road. Historians say that there really was a family in the area at one time that owned a hearse, but it's unlikely that anybody chases anybody down this particular road because the area is too filled with trees for a car to get through.

At the Archer Woods Cemetery near Chicago, Ill., a team of ghostly horses towing a phantom hearse occasionally appears in the night, seriously frightening (if not actually harming) those who claim to have seen it. The story of the horses and the ghostly hearse is part of a cycle of ghost stories concerning the cemeteries in this region and the restless spirits buried there.

Sleepy Hollow Road in Louisville, Ky., is the scene of several modern ghost stories, one of which concerns a mysterious black hearse that follows cars in the area, causing them to run off the road and fall off a cliff.

It seems that as long as hearses are a part of funerals there will be eerie stories told about them, as well as people who are fascinated by them. It's difficult to not have strong emotional feelings concerning anything that has to do with death. Including hearses. So remember:

­For more information about hearses and other related topics, follow the links below.