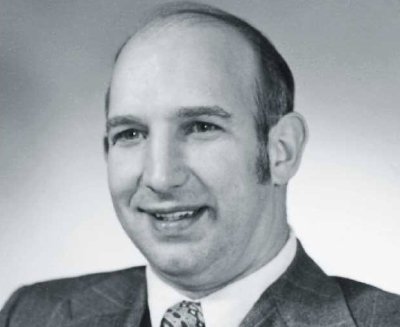 Gale Halderman was instrumental in getting the first Mustang prototype built. See more pictures of the Ford Mustang.

Recruited to Dearborn in 1954, designer Gale Halderman had helped shape the 1957 standard Ford before moving to the Corporate Advanced Studio, where he worked on ideas for a new low-cost sporty car favored by Ford division boss Lee Iacocca. As fate would have it, Halderman was transferred to the Ford Studio just in time to help Joe Oros' team create the design chosen for the production Mustang over proposals from Corporate Advanced and the Lincoln-Mercury Studio.

Oros credits Halderman not only for contributing to the design but also for skillfully guiding the Mustang from clay-model dream to realistic, fully producible car. Here is Halderman's account of the creation of the 1965 Ford Mustang prototype.

I worked on a little electric-car proposal with Colin Neale and Alex Tremulis, who each did one side of a clay model. Elwood Engel said he liked both sides and wanted to do two full clays, which were then built in fiberglass. Lee Iacocca and Hal Sperlich came through and saw them. They said, "You know, they have flair and lots of excitement. Why don't we give the sporty-car package one more shot?"

Those proposals encouraged them to reopen the design process for the car that became the Mustang. They had Ray Smith prepare a 2+2 package on the blackboard, and that's where the Mustang program started.

Those proposals encouraged them to reopen the design process for the car that became the Mustang. They had Ray Smith prepare a 2+2 package on the blackboard, and that's where the Mustang program started.

We did a design series called Median based on that package -- what the car would look like proportioned in different ways and with different engine options. We did maybe six. We were still searching for the right-sized car and package arrangement. They were good-looking cars, except I think none of them were exciting enough.

About that time, I was transferred to the Ford studio again. They were just starting work on the '65 full-size Ford and I was assigned to work on it with Joe Oros. But one day Joe said, "We've just been told by Bordinat to do a proposal for a small car that Lee wants to build." I told Joe, "I won't have time. I'm doing the '65 Ford." He told me I had to give him some designs. So I went home and sketched. I took about five or six sketches with me the next morning and put them up on the board. Joe picked one of those to be clay-modeled.

©2007 Publications International The clay model that would become the Mustang was based on a Halderman design.

Dave Ash had already done a clay -- very boxy, very stiff-looking. Joe came back from a management conference and said, "No, no, no, we're not going to do that!" That's when he said he wanted me to submit some designs. So we actually started over on the clay model using the theme from one of my designs, which had scoops on the sides and the hop-up quarter lines. The front end was primarily designed afterward.

We built the clay model in our Corporate Advanced Studio. George Schumaker was assigned to follow my sketch into the full-sized clay model. I was still working on the big '65 Ford across the hall, but during the day I kept going over to where the Mustang clay was to help interpret my sketch. Then Joe got me in there working on the taillamps and rear end while he and Charlie Phaneuf did the front end.

Learn on the next page how designers set about turning Halderman's sketch into the prototype for the 1965 Ford Mustang. 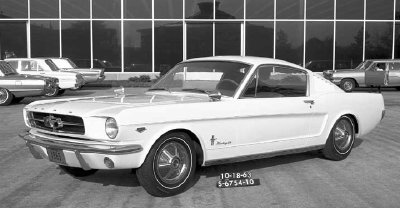 This fiberglass model of the Mustang fastback coupe is very close to the showroom version released in Autumn 1964.

Ford designer Gale Halderman had produced a sketch that won favor as the prototype for the 1965 Ford Mustang. Here, in Halderman's own words, is how that sketch became reality.

After the Mustang clay was approved, Joe asked me to manage the feasibility process. We had to modify the hood and headlamp area, and the front bumpers a little to accommodate the parking lamps. We lifted them up a little bit, but we didn't change the theme. We had to reproportion it slightly for manufacturing.

The fastback was Joe Oros' idea and designed in Charlie Phaneuf's studio. There was a lot of discussion about whether the roofline should come back all the way, or if it should leave a little bustleback, which is what Joe strongly wanted. But we all felt that for Mustang to be seen as a really sporty car, it had to have a fastback model. We did it in secret. No one, including Sperlich or Iacocca, saw it until it was finished. We cast it in fiberglass, painted it bright red, and then showed it to Iacocca. He said, "We've got to do it!"

No one knew the Mustang was going to be as popular as it was, but it created a huge stir in the company. Everybody just loved it, even the engineers, though we must have bent 75 in-house engineering and manufacturing rules. The Mustang had the first floating bumpers. The whole front end was a die-casting with a floating hood.

There were so many things the engineers said we shouldn't be doing, but they didn't want to change them either. There was so much enthusiasm right from the beginning. Even the drivers at the test track loved it. We would go there for meetings, and the crowds of people around it were huge. That was totally unusual, so we suspected the Mustang was going to be a hit.

Lee Iacocca pushed the Mustang through and is entitled to the credit for it. Mr. Ford knew that Iacocca had assigned Hal Sperlich to determine where the holes were in our car lines, markets where we didn't have cars. He came back and said we don't have an entry-level car for young people, something exciting for them to drive to work, and for newly married couples, and so forth. At first, Henry Ford II didn't want it because it was a brand-new vehicle, and we just had a failure called the Edsel. But Lee loved it.