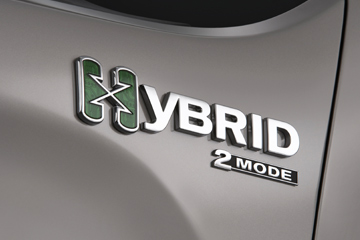 The only thing we really know for sure is that someone took your hybrid badge simply because it was there. A more precise answer isn't possible without having access to your personal miscreant, and even then, it's unlikely we'd get a real explanation. But we can offer some theories.

Ask a group of adults why a badge was stolen and you'll probably get adult theories -- logical guesses, you could say. The following possible reasons came up repeatedly when the author asked various adults why a hybrid car badge might have been stolen:

The thief might be looking to save money on parking, or wants to cut their commute time. Some cities offer free parking for hybrid vehicles. Perhaps someone hopes to hoodwink local law enforcement by gluing your hybrid badge onto his or her carbon-spewing clunker. They might fool the mall security person this way, but not the legitimate hybrid driver wanting the same parking spot. A few states allow "green" vehicles to use HOV (High Occupancy Vehicle) lanes with only the driver onboard, but most require a special sticker or license plate. New Jersey doesn't require anything special, and New Jersey Turnpike Authority officials have said, "state police do not anticipate any problems identifying which cars are hybrids" [source: HybridCars.com].

An opportunistic thief may have taken your badge, thinking they could sell it to buy something they really want. While this is possible, it's also unlikely. Economic crimes are committed by market-driven pragmatists and there doesn't seem to be much demand for used hybrid badges. However, a state-issued sticker, badge or license plate authorizing HOV lane usage is another matter. A recent check of a popular online auction site revealed only two used hybrid badges were offered -- no doubt by perfectly legitimate vendors. Neither had bids.

There's always a chance that a person who really doesn't like all things "green" could have taken your hybrid badge. You know who we're talking about, right? That weird neighbor who goes out of his way to mow his lawn with his smoky old mower on ozone action days. Perhaps he found your car's hybrid badge somehow offensive? If so, it's probably buried deep in a garbage mountain somewhere.

Concrete statistical data isn't available for this type of crime, but it appears that most reported badge thefts have nothing to do with rational -- if criminal -- adult actions. So, let's steal on over to the next page, where we'll catch the most likely perps in the act.

Who would want to take your hybrid badge?

Stealing car badges (aka emblems) is a relatively uncommon but extremely irritating worldwide phenomenon, with owners reporting thefts in India, Sweden and even in South America where the Peruvian Budget Car Rental contract includes "Car Emblem Theft Protection" [source: Budget Car Rental - Peru]. In the United States, badges gone missing have been reported from coast to coast. No doubt many additional thefts have gone unreported.

So, who's wreaking this havoc? Well, whether it's right or wrong, most car badge thefts are attributed to teenagers. The hardest hit country seems to be England, where collecting car badges through illicit means appears to be endemic among that nation's youth. Of course England isn't alone. America has a tradition of emblem theft, too. A 1996 episode of "The Simpsons" dramatized the crime, with Bart's nemesis Nelson swiping the hood ornament off of school superintendent Chalmers' Honda. [TVLoop.com].

Badge thieves who have the misfortune to be nabbed seldom explain why they did it, unless they wanted a badge to make a necklace. It seems unlikely someone would use a hybrid badge for that purpose, though. Explaining why a teenager does something is way beyond our scope here. But we can tell you this, even among behavioral experts, irrational theft and vandalism of items of little value but big inconvenience seems to cause normally calm people to suddenly become vociferous advocates of public punishments, like caning, for example.

Hybrid cars are popular right now, which might help explain why a hybrid badge might attract a young "collector." But there's also a possibility your badge migrated to someone else's car, either for the "green" prestige factor, if applied to a newer vehicle, or as a joke if it now adorns the tailgate of an old pickup. Kind of makes you wonder if the thief knew a generic hybrid emblem can be obtained on the Internet for as little as $7.95?

Most body-side badges are flat on the back and are stuck on tightly with a moisture and UV resistant adhesive. Hood and deck emblems occasionally use attachment studs. Thieving vandals are typically in a hurry and often use a screwdriver or a similar tool to pry badges from the car's surface. This method usually scratches the paint and may even damage the body panel. Legitimate do-it-yourself debadgers typically use a hair dryer or a heat gun to soften the adhesive, and then carefully separate the badge from the body panel, by gently "sawing" through the adhesive with a credit card, dental floss or fishing line.

Stick around for the next page, where we provide some advice on replacing your stolen hybrid badge yourself.

So here's the scene: You're driving down the street one evening and you spot a young person prying a badge off a Honda parked in a driveway. What should you do? Well, before you punch up 911 on your cell, think about this: You may have simply happened upon an enthusiast "debadging" his or her own car. Many owners feel removing ornamentation and emblems gives their car a cleaner, more personalized appearance. Debadging is not a new trend -- in fact, many car customizers of the 1940s and '50s loved to "dechrome" their cars, too. The "nosed and decked" debadged 1950 Mercury driven by James Dean in the 1954 film, "Rebel Without a Cause" is a famous example.

If your hybrid badge was cleanly removed by someone hoping to reuse or sell it, your car's paint and surrounding body panels may be OK. If so, you can likely replace the stolen badge yourself, without getting the insurance company involved.

Your hybrid is likely new, or at most, a few years old, so you should be able to order a new badge for it from the dealership. There are also badge and car brand specialists who catalog late-model car badges. You can find them through a simple online keyword search. A 2008 Ford Escape hybrid badge lists for about $35 and a pair of Toyota Prius badges will set you back around $37. Ask the parts counter person if special chemicals are needed to prepare the adhesive bond before installation.

You're biggest challenge may be getting the new badge located exactly where the old one was. Adhesive residue and surface grime on the car body may help you see where the old badge was located, so hold off on cleaning up the car until you've thought through how you'll place the new badge. Masking off the area with blue painter's tape can frame the "footprint" of the old badge. This will also help to protect the paint, while giving you a precise target for installing the new badge. If need be, you may be able to take reference photos and measurements from a dealership car.

Test the location of the new badge with a paper template, made by tracing around the badge and cutting out its shape. Use a couple of strips of masking tape to hold the template on your car once you're satisfied with the location. Then, make reference marks with a grease pencil and remove the template. Next, you'll need to carefully clean off any remaining grime and adhesive residue, taking care to retain your reference marks. You can warm the old adhesive residue with a hair dryer to make removal easier. Use a tar remover or other paint-safe product to help clean the area, too. When the paint surface looks clean, go over the location with a bit of rubbing alcohol -- but wait until after you've attached the new badge before breaking out the car wax. Practice positioning the new badge a few times before exposing the adhesive on the back. That way, you'll know just how to hold it when you're ready to apply it for good.

For more information about hybrid cars, follow the links on the next page.

Between mid-2005 and early 2007, California issued 85,000 stickers allowing single-occupant use of HOV lanes through 2010 by "certain clean alternative fuel and full-electric vehicles," including the Toyota Prius and Honda Civic Hybrid and Insight models [source: California Air Resources Board]. Once the allocated stickers were gone, a market for used stickers sprang up. The stickers aren't easily removed from vehicles, so thieves began stealing entire rear bumper fascias off stickered cars. The good news in all of this is that theft victims can apply for a replacement sticker. But according to a California Toyota dealership parts manager who asked to remain unidentified, the going rate for a black-market Prius fascia with an HOV sticker is rumored to be about $2,000!