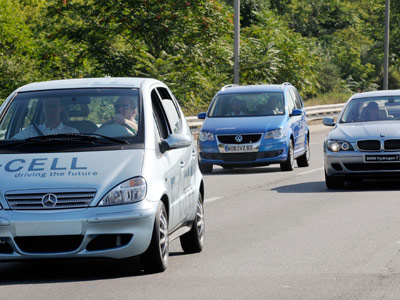 A lot of people believe that hydrogen fuel cells are the most important alternative fuel technology currently under development. It is not, however, without problems, and it may be decades before fuel cell technology is in wide use. We can roughly group the problems with hydrogen into three categories: the costs of developing the technology, difficulties and dangers with hydrogen storage and the possibility that this "non-polluting technology" isn't so non-polluting after all. Here are some of the hydrogen car setbacks that we can expect to deal with in the near future.

The costs of developing hydrogen technology are high. Not only do we have to design and develop the fuel cells and the cars, but we have to develop an infrastructure to support these fuel-efficient vehicles. Imagine if you currently owned a hydrogen car. Where would you go to fill your tank? Assuming you don't have a hydrogen production facility in your garage, you'll need a hydrogen refueling station, and the only place where any significant number of such stations exists at the moment is in the state of California, where Governor Arnold Schwarzenegger has committed to supporting a hydrogen future. Some of the more pessimistic estimates have placed the cost of building an infrastructure that will allow a significant number of hydrogen cars to be as high as $500 billion -- and the time to produce the infrastructure as long as four decades!

The cost of the cars is high, too. With platinum as the most widely used catalyst in the fuel cells, the price of a single fuel cell vehicle is currently more than $100,000 and even perhaps considerably more, which is why the only hydrogen cars available for you to drive at the moment are for lease, not for sale. Few people are in a position to afford such an expensive car. Other catalysts are being developed which will probably be less expensive than platinum, but nobody knows how soon they'll be available for large-scale use.

The storage problem is also a thorny one. Hydrogen is a gas and it likes to spread out. Putting it in a car means squeezing it down to a reasonable size, and that isn't easy. Furthermore, hydrogen gets warm while it's sitting in the tank of a parked car, which causes the gas to expand. This means that the tanks have to vent the hydrogen periodically from the car. Leave a hydrogen car sitting around for more than a few days and all the fuel will be gone. Hydrogen is also highly flammable -- the spectacular explosion of the dirigible Hindenburg in the 1930s is believed by some to have been the result of a hydrogen fire -- so, if the hydrogen gets out of the tank, it has the potential to be dangerous. Fortunately, hydrogen fires aren't as hot as gasoline fires and are less likely to start secondary fires. And because hydrogen rises, most escaped hydrogen will float away before it can actually do any harm.

And is hydrogen really non-polluting? A fuel cell produces only heat and water as exhaust, but the processes used to create the hydrogen are not necessarily as clean. Electrolysis uses electricity and that electricity will often come from plants that burn coal, a highly polluting source. And when hydrogen is extracted from natural gas, it produces carbon emissions, which is exactly what we're trying to avoid by using hydrogen in the first place.

Many people think that we'll overcome these obstacles eventually, but it's going to be difficult. Others believe that our best bet for fuel efficiency and eco-friendly driving in the near future lies not in hydrogen but in hybrid electric vehicles, like the Toyota Prius, the Ford Fusion hybrid and other similar hybrid cars. Still, it's possible that within the next couple of decades, you just might own a hydrogen fuel cell car.

For more information about alternative fuels, hybrid cars and other related topics, follow the links the next page.