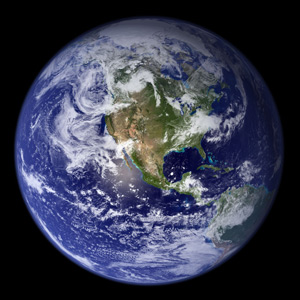 The Earth has plenty of hydrogen available in the form of water; however, separating it, collecting it and storing it may prove to be quite difficult.
AP Photo/NASA

So how do manufacturers actually build fuel-efficient vehicles, like fuel cell cars? Well, hydrogen car production is not vastly different from producing typical cars. Of course, the drive train, for instance, and the electrical systems will be somewhat unique because a fuel cell creates electricity. Therefore, a hydrogen-powered car and electric car have a lot in common in that respect. Perhaps a more important question is how the hydrogen itself will be produced. Given that hydrogen is the most abundant element in the universe, constituting roughly 90 percent of the atoms in existence, you'd think that this wouldn't be a problem. Well, think again. Hydrogen is also the lightest element in the universe and any uncontained hydrogen on the surface of the Earth will immediately float off into outer space. What hydrogen remains on this planet is bound with other elements in molecular form, most commonly in water (H2O) molecules. And there happens to be a lot of H2O on the surface of the Earth.

But how do we separate the hydrogen molecules in the water from the oxygen molecules? And if we don't use water as a hydrogen source, where else can we get hydrogen?

The simplest way of getting hydrogen from water is the one that Sir William Grove knew about more than 150 years ago: electrolysis. If you pass an electric current through water, the H2O molecules break down. Similar to fuel cell operation, this process uses an anode and a cathode, usually made from inert metals. When an electric current is applied to the water, hydrogen forms at the cathode, and oxygen forms at the anode. Although this process is slow, it can be done on a large scale.

An alternative source for hydrogen is natural gas, which consists of naturally occurring hydrocarbons. A process called steam reformation can be used to separate the hydrogen in the gas from the carbon. At present, this is the most common method of industrial-scale production of hydrogen and would likely be the first method used to produce the hydrogen for fuel-cell vehicles. Unfortunately, this process uses fossil fuels -- the natural gas -- so if the point of building cars that run on hydrogen is to avoid depleting fossil fuel reserves, natural gas would be the worst possible source of this fuel.

Some experts have suggested that it might be possible to build miniature hydrogen plants that will fit in the average person's garage, so it won't even be necessary to drive to the local fueling station to fill up the car's hydrogen tank. The most extreme form of this idea has been the suggestion that electrolysis could be performed inside the car itself, which would make possible the astounding idea of a car that runs on water! However, the power for the electrolysis has to come from some sort of battery, so a water-powered car would need to be periodically recharged.

So, are green driving machines like fuel-cell equipped vehicles really the cars of the future? Many people hope so, but there are several potential roadblocks on the way to a world where people get around in cars that run on hydrogen. We'll look at those on the next page.