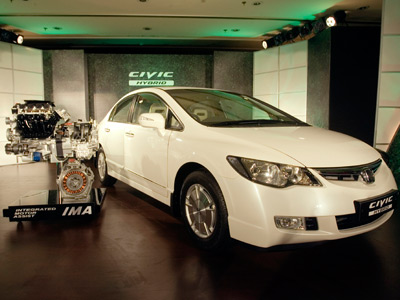 A Honda Civic Hybrid car and its displayed engine, left, are seen at an event in New Delhi, India, on June 18, 2008.
AP Photo/Gurinder Osan

To experience a somewhat low-tech example of the hybrid driving experience, you don't have to go any farther than your local golf course. Have you ever driven a gas-powered golf cart? Well, if you've never driven a hybrid car, the golf cart example may be the best way to describe how it feels -- sort of.

If you're familiar with gas-powered golf cart operation, then you know that the engine in the cart doesn't continuously run while you're on the fairway hitting your approach shot to the green. Instead, the engine comes on as soon as you press the gas pedal. Hybrid vehicles, like the Honda Civic Hybrid, work in a similar way. Of course, the Civic Hybrid is far more advanced -- and then there's also that bit about the electric motor, too. And that's why the Integrated Motor Assist (IMA) system that you learned about earlier is so important to the Civic Hybrid.

Pretty cool stuff, right? And all of this works seamlessly so that the driver doesn't have to do anything other than drive the car as he or she normally would.

If you'd like more information about the Honda Civic Hybrid and other hybrid vehicle technology, follow the links below.