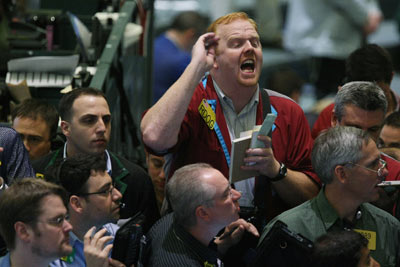 Photo by Mario Tama/Getty Images
Traders work in the crude oil options pit at the New York Mercantile Exchange, April 22, 2008. Oil posted a then-record high of more than $118 following oil demand from China and supply concerns from Russia and Nigeria.

When you pump $30 into your tank, that money is broken up into little pieces that get distributed among several entities. Gas is just like any other consumer product: There's a supply chain and several groups who are responsible for setting the price of the product. The media can sometimes lead you to believe that the price of gas is based solely on the price of crude oil, but there are actually many factors that determine what you pay at the pump. No matter how expensive gas becomes, all of these entities have to get their slice of the pie. According to the U.S. Department of Energy, here's an approximation of where each dollar you spend on gas goes:

This is what the average breakdown looked like in April 2011. Let's look at those components in more detail.

Gas prices also vary from state to state for several reasons. Taxes are probably the biggest factor in the different prices around the country. Additionally, competition among local gas stations can drive prices down. Distance from the oil refineries can also affect prices -- stations closer to the Gulf of Mexico, where many oil refineries are located, have lower gas prices due to lower transportation costs. There are also some regional factors that can affect prices.

World events, wars and weather can also raise prices. Anything that affects any part of the process, from the moment the oil is drilled, through refining and distribution to your car will result in a change in price. Military conflicts in parts of the world with lots of oil supplies can make it difficult for oil companies to drill and ship crude oil. Hurricanes have damaged offshore drilling platforms, coastal refineries and shipping ports that receive oil tankers. If a tanker itself is lost or damaged, or leaks its oil into the ocean, that will put a dent in the market as well.

Next, we'll look at why it's more expensive to buy gas in Milwaukee, Wis., than in many other parts of the United States.­