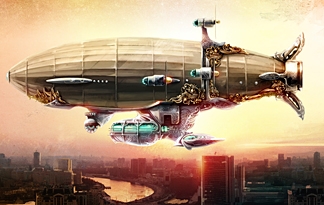 Have you ever heard of Steampunk? Check out these Alternative Fuel Vehicle Pictures to learn more!
DCI

A determined young man, hair neatly slicked to each side of a severe center part, wrestles with the equipment he’s installing in the cockpit of a rocket. His long-sleeve cotton shirt is tucked into straight-leg linen trousers, and the required suspenders are performing admirably despite the undignified positions his work necessitates. It’s his waistcoat that’s giving him fits, migrating toward his chin with each turn of the wrench. He tosses the tool, hears the metallic clang on the control center’s floor, and eases himself into the velvety armchair that faces the mammoth machine’s panel of directional dials and gesticulating gauges. He’ll return to his work in a moment, but for now, he’s content to grasp the sticks that control the rocketship’s hydraulic aft rudder and gaze skyward. Before long, that’s where he’ll be steering his steam-powered invention.

If this scenario seems like an unlikely marriage of 19th-century Victorian culture and modern-day technology, that’s because it is. The implausible idea that an 1800s-era man, however inventive, could build a rocketship capable of navigating the stars is just one of the many old-meets-new plots that come together in the literary subgenre known as steampunk.

Steampunk imagines how people in the past might have adopted technology from the future. Instead of relying on future power sources like electricity, the majority of steampunk-style contraptions are powered directly by steam. And so were many actual Victorian-era inventions, such as steam-powered pumps used to remove water from coalmines. These machines operated like all basic steam-powered inventions of the day. The heat from a fuel, such as coal or wood, caused compact liquid water molecules to expand. As the heat triggered the molecules to move away from each other, they were transformed from a liquid state into a vapor state -- steam -- and the expansion pushed a piston to power the pump.

Despite all the high-tech advances of the last 100 years, steam is still relevant as an energy source. It's used to generate electricity in fuel-burning and nuclear power plants, and has become an important addition in home appliances, like dishwashers and clothes dryers. More importantly, steam's benefits have inspired researchers to take another look at this elemental energy source and decipher how it could be harnessed for the future. Find out what some steam enthusiasts are dreaming up on the next page.

The Future of Steam Energy

Many people believe steampunk is the brainchild of two well-known authors of the late 1800s, H.G. Wells and Jules Verne. Verne’s book, "From the Earth to the Moon," published in 1865, depicted submarines, solar sails and a rocketlike projectile that transported people to the moon. Although these inventions seemed improbable for many years, several of the contraptions he penned have been incarnated in modern machines. Steam has experienced a similar revival. It’s far from being a defunct energy source, a timeworn literary construct or a remnant of the Industrial Revolution.

According to the U.S. Department of Energy, more than 45 percent of the fuel burned by U.S. manufacturers creates steam, and most of the electricity in the U.S. is created by steam turbines. A basic steam turbine uses fuel to heat a boiler that converts water to steam. A compressor then condenses the steam into a high-pressure mass that's transferred to a spinning turbine, where it generates electricity to power factories, homes or even vehicles. Steam-powered vehicles are still in development, but when compared with gas-fueled vehicles, they're expected to be more energy-efficient and have fewer environmentally harmful emissions.

Before steam power can take a quantum leap, however, scientists need to overcome a major efficiency issue. Current steam generators don’t capture all the steam that’s produced -- a large percentage of it (up to two-thirds) is lost. Some steam simply escapes into the atmosphere, while some cools and is recaptured as wastewater. While the wastewater is often recycled right back into the steam generator, it would be more efficient to capture it in the first place, which is exactly what researchers are attempting to do by developing highly efficient steam turbines.

One of the distinct advantages of steam power is that nearly any type of fuel can be burned to turn water into steam. Instead of burning fossil fuels to make steam, scientists contend that combustible organic waste materials, like corncobs or soy oil, could be used. Steam turbines could even be heated using waste wood. The Seattle Steam Company, for example, burns used wood pallets, broken tree limbs and construction scraps to produce enough steam to heat 200 downtown Seattle buildings.

Water is a nonhazardous, inexpensive and plentiful natural resource that can generate up to 6 times its mass in steam, which means it holds promise as a cleaner energy with widespread industrial and residential applications. Even if none of those applications is a steam-powered rocket that can catapult an impeccably dressed human into space -- yet.

The earliest mention of the word "steampunk" occurred in 1987, when author K.W. Jeter proposed the term in a letter to the sci-fi magazine "Locus." Today, steampunk refers to books like "The Difference Engine," which chronicles the invention of the first computer in a 19th-century setting, as well as comics like "League of Extraordinary Gentlemen," films like "Wild, Wild West" and a style of dress popular among costumers at pop culture conventions.

How Biodiesel Works
Can the U.S. Navy turn seawater into jet fuel?
This Woman's Job Is to Figure Out Why People Don't Buy Electric Cars