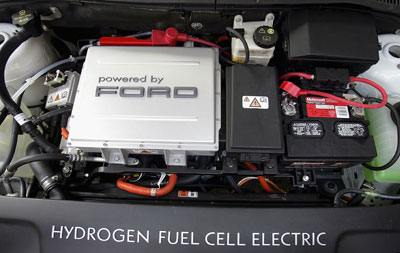 The engine of a Ford hydrogen fuel cell electric car. The auto was on display at the 2005 National Hydrogen Association's national conference.
Joe Raedle/Getty Images

In many cases, hydrogen is safer than the fuel we currently use to power our cars. Carbon-based fuels tend to spread as liquids (as you well know if you've ever spilled gasoline on yourself at the pump). When it burns, conventional fuel produces hot ash, creating radiant heat. This isn't the case with hydrogen. In its pure form, hydrogen burns no carbon and produces no hot ash and very little radiant heat [source: RMI]. What's more, when hydrogen leaks, it ascends rapidly into the atmosphere, so it has less time to burn [source: Princeton].

So what about the Hindenburg? Both proponents and opponents of hydrogen fuel have latched onto the ill-fated blimp in their debate. While opponents point to it as a cautionary tale, proponents view it as exoneration for hydrogen.

Although the hydrogen aboard the Hindenburg certainly did burn with incredible force, it wasn't the hydrogen that created the disaster -- it was aluminum powder. To reflect sunlight, the skin of Hindenburg was covered in this powder, a form equivalent to rocket fuel [source: RMI]. And the cotton fabric that made up the blimp's skin was waterproofed with highly flammable acetate [source: ABC]. Hydrogen proponents also point out that the flames in the Hindenburg disaster burned upward rather than out because the element is so lightweight. This left the passengers in the carrier beneath relatively unmolested by the flames. Thirty-five of the 36 Hindenburg deaths were the result of passengers jumping from the airship; all of those who remained aboard survived [source: RMI].

The challenge presented by hydrogen fuel storage is to come up with ways to create storage tanks that won't prove to be a cautionary tale against hydrogen for future generations. In other words, what would make the best storage tank to prevent hydrogen from exploding in a car accident?

Steel tanks are one possibility. They're strong enough to serve as reliable carriers for hydrogen gas in automobiles. If an accident does occur, a steel tank will likely be able to withstand an impact without suffering a puncture or rupture. One problem with steel, however, is that hydrogen is so lightweight and therefore less dense than gasoline. Any tank that holds pressurized hydrogen fuel would have to be much bigger than the conventional gas tank on your car. A steel tank would be pretty heavy and reduce energy efficiency.

Composite materials seem to offer even more promise than steel. Tanks made of polyethylene are lightweight, can be shaped to fit a car and are designed to powder -- absorb the energy of an impact, reducing the tank to dust and ostensibly releasing the hydrogen safely into the atmosphere [source: Princeton].

Hydrogen may ultimately be stored in materials that can hold the element and release it when needed. Some types of metal, like metal hydride, can trap hydrogen molecules within their compositional structure. Here, the hydrogen is stored safely and released when the metal is heated. What makes this technology even more appealing is that the heat necessary for the release of hydrogen molecules from their metal tanks could come from the waste heat produced by a hydrogen fuel cell [source: DOE].

It doesn't seem the "hydrogen fear factor" is doing much to dissuade continued research into its viability as a fuel source. And if the world really is running out of oil, we may have to put aside those fears once and for all.

For more information on hydrogen fuel and other related topics, visit the next page.