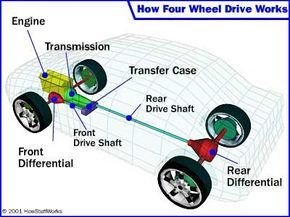 There are almost as many different types of four-wheel-drive systems as there are four-wheel-drive vehicles. It seems that every manufacturer has several different schemes for providing power to all of the wheels. The language used by the different carmakers can sometimes be a little confusing, so before we get started explaining how they work, let's clear up some terminology:

Part-time and full-time four-wheel-drive systems can be evaluated using the same criteria. The best system will send exactly the right amount of torque to each wheel, which is the maximum torque that won't cause that tire to slip.

In this article, we'll explain the fundamentals of four-wheel drive, starting with some background on traction, and look at the components that make up a four-wheel-drive system. Then we'll take a look at a couple of different systems, including the one found on the Hummer, manufactured for GM by AM General.

We need to know a little about torque, traction and wheel slip before we can understand the different four-wheel-drive systems found on cars.

The interesting thing about torque is that in low-traction situations, the maximum amount of torque that can be created is determined by the amount of traction, not by the engine. Even if you have a NASCAR engine in your car, if the tires won't stick to the ground there is simply no way to harness that power.

Wheel slip -- There are two kinds of contact that tires can make with the road: static and dynamic.

Quite simply, wheel slip occurs when the force applied to a tire exceeds the traction available to that tire. Force is applied to the tire in two ways:

Let's say you have a fairly powerful rear-wheel-drive car, and you are driving around a curve on a wet road. Your tires have plenty of traction to apply the lateral force needed to keep your car on the road as it goes around the curve. Let's say you floor the gas pedal in the middle of the turn (don't do this!) -- your engine sends a lot more torque to the wheels, producing a large amount of longitudinal force. If you add the longitudinal force (produced by the engine) and the lateral force created in the turn, and the sum exceeds the traction available, you just created wheel slip.

Most people don't even come close to exceeding the available traction on dry pavement, or even on flat, wet pavement. Four-wheel and all-wheel-drive systems are most useful in low-traction situations, such as in snow and on slippery hills.

The benefit of four-wheel drive is easy to understand: If you are driving four wheels instead of two, you've got the potential to double the amount of longitudinal force (the force that makes you go) that the tires apply to the ground.

This can help in a variety of situations. For instance:

There are also some situations in which four-wheel drive provides no advantage over two-wheel drive. Most notably, four-wheel-drive systems won't help you stop on slippery surfaces. It's all up to the brakes and the anti-lock braking system (ABS).

Now let's take a look at the parts that make up a four-wheel-drive system.

Components of a Four-wheel-drive System 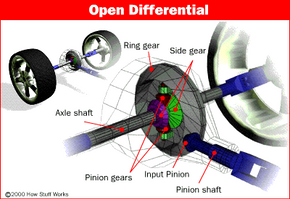 The main parts of any four-wheel-drive system are the two differentials (front and rear) and the transfer case. In addition, part-time systems have locking hubs, and both types of systems may have advanced electronics that help them make even better use of the available traction.

A typical part time four-wheel drive transfer case: The planetary gear reduction can be engaged to provide the low-range gearing.

This is the device that splits the power between the front and rear axles on a four-wheel-drive car.

Back to our corner-turning example: While the differentials handle the speed difference between the inside and outside wheels, the transfer case in an all-wheel-drive system contains a device that allows for a speed difference between the front and rear wheels. This could be a viscous coupling, center differential or other type of gearset. These devices allow an all-wheel-drive system to function properly on any surface.

The transfer case on a part-time four-wheel-drive system locks the front-axle driveshaft to the rear-axle driveshaft, so the wheels are forced to spin at the same speed. This requires that the tires slip when the car goes around a turn. Part-time systems like this should only be used in low -traction situations in which it is relatively easy for the tires to slip. On dry concrete, it is not easy for the tires to slip, so the four-wheel drive should be disengaged in order to avoid jerky turns and extra wear on the tires and drivetrain.

Some transfer cases, more commonly those in part-time systems, also contain an additional set of gears that give the vehicle a low range. This extra gear ratio gives the vehicle extra torque and a super-slow output speed. In first gear in low range, the vehicle might have a top speed of about 5 mph (8 kph), but incredible torque is produced at the wheels. This allows drivers to slowly and smoothly creep up very steep hills.

Each wheel in a car is bolted to a hub. Part-time four-wheel-drive trucks usually have locking hubs on the front wheels. When four-wheel drive is not engaged, the locking hubs are used to disconnect the front wheels from the front differential, half-shafts (the shafts that connect the differential to the hub) and driveshaft. This allows the differential, half-shafts and driveshaft to stop spinning when the car is in two-wheel drive, saving wear and tear on those parts and improving fuel-economy.

Manual locking hubs used to be quite common. To engage four-wheel drive, the driver actually had to get out of the truck and turn a knob on the front wheels until the hubs locked. Newer systems have automatic locking hubs that engage when the driver switches into four-wheel drive. This type of system can usually be engaged while the vehicle is moving.

Whether manual or automatic, these systems generally use a sliding collar that locks the front half-shafts to the hub.

On many modern four-wheel and all-wheel-drive vehicles, advanced electronics play a key role. Some cars use the ABS system to selectively apply the brakes to wheels that start to skid -- this is called brake-traction control.

Others have sophisticated, electronically-controlled clutches that can better control the torque transfer between wheels. We'll take a look at one such advanced system later in the article. 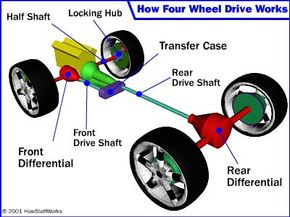 The type of part-time system typically found on four-wheel-drive pickups and older SUVs works like this: The vehicle is usually rear-wheel drive. The transmission hooks up directly to a transfer case. From there, one driveshaft turns the front axle, and another turns the rear axle.

When four-wheel drive is engaged, the transfer case locks the front driveshaft to the rear driveshaft, so each axle receives half of the torque coming from the engine. At the same time, the front hubs lock.

The front and rear axles each have an open differential. Although this system provides much better traction than a two-wheel-drive vehicle, it has two main drawbacks. We've already discussed one of them: It cannot be used on-road because of the locked transfer case.

The second problem comes from the type of differentials used: An open differential splits the torque evenly between each of the two wheels it is connected to (see How Differentials Work for more details). If one of those two wheels comes off the ground, or is on a very slippery surface, the torque applied to that wheel drops to zero. Because the torque is split evenly, this means that the other wheel also receives zero torque. So even if the other wheel has plenty of traction, no torque is transferred to it.

Previously, we said that the best four-wheel-drive system will send exactly the right amount of torque to each wheel, the right amount being the maximum torque that won't cause that tire to slip. This system rates fairly poorly by that criterion. It sends to both wheels the amount of torque that won't cause the tire with the least traction to slip.

There are some ways to make improvements to a system like this. Replacing the open differential with a limited-slip rear differential is one of the most common ones -- this makes sure that both rear wheels are able to apply some torque no matter what. Another option is a locking differential, which locks the rear wheels together to ensure that each one has access to all of the torque coming into the axle, even if one wheel is off the ground -- this improves performance in off-road conditions.

In the next section, we'll take a look at what could be the ultimate four-wheel-drive system: the one on the Hummer.

The AM General Hummer military vehicle combines some advanced mechanical technology with sophisticated electronics to create what is arguably the best four-wheel-drive system available.

Diagram of Hummer system, one cool feature of the Hummer is the geared hubs it uses at each wheel. These raise the entire driveline, giving the Hummer 16 inches (40.64 cm) of ground clearance, more than double what most four-wheel drives have.

The Hummer system encountering various combinations of terrain: For the Hummer to get stuck, all four wheels would have to lose traction.

The brake traction control system applies significant torque to the wheel that wants to slip, allowing the Torsen differential to apply two to four times that increased torque to the other wheel.

Let's put the Hummer to the test.

The system on the Hummer is capable of sending a large amount of torque to whichever tires have traction, even if this means sending it all to a single tire. This brings the Hummer pretty close to our definition of an ideal four-wheel-drive system: one that supplies each tire with the maximum amount of torque it can handle.

For more information on four-wheel drive and related topics, check out the links on the next page. 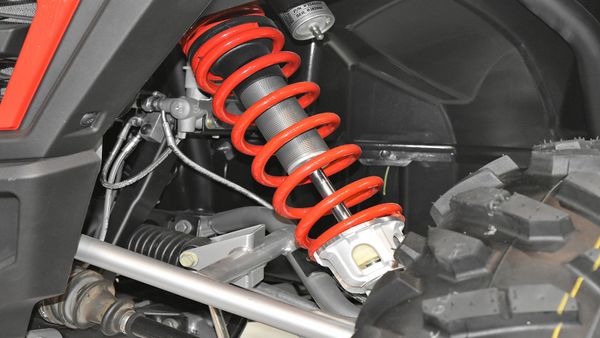 Up Next
How Car Suspensions Work
Explore More 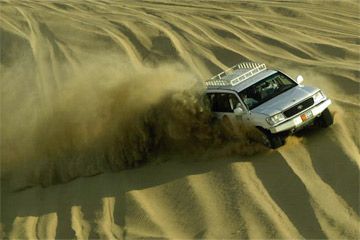