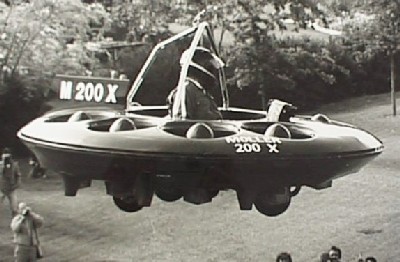 The M200X, the predecessor of the Skycar, flew for the first time in 1989 to a height of 50 feet.
Photo courtesy Moller International

When George Jetson first flew across American TV screens in his flying car-like vehicle in 1962, many of us began wondering when we could buy our own Supersonic Suburbanite or Spacion Wagon. Amazingly, that day may be around the corner. After a century of unfulfilled promises, flying cars may fill the skies in the next few decades. There are still some obstacles to overcome, including receiving approval from the FAA, but the cars are close to being finished.

There is no lack of engineers taking on the challenge to design a new breed of flying cars. While sleeker, more advanced cars have been developed in the last decade, no one has come close to opening up a flying car dealership. Here are a few of the individuals attempting to deliver a flying car:

The Skycar will be operated completely by computer and guided by GPS satellites.
Photo courtesy Moller International

Moller's latest design, the Skycar M400, is designed to take off and land vertically, like a Harrier Jet, in small spaces. It can reach speeds of 400 mph (644 kph), but will cruise at around 350 mph (563 kph), and it has a range of 900 miles (1449 km). Gasoline, diesel, alcohol, kerosene and propane can be used to fuel the Skycar, and its fuel mileage will be comparable to that of a medium-sized car, getting 20 miles (32.2 km) to the gallon. The initial cost of a Skycar will be about $1 million, but once it begins to be mass produced that price could come down to as low as $60,000.

The four-seat Skycar is powered by eight rotary engines that are housed inside four metal housings, called nacelles, on the side of the vehicle. There are two engines in each nacelle so that if one of the engines in one of the nacelle fails, the other engine can sustain flight. The engines lift the craft with 720 horsepower, and then thrust the craft forward. The Wankel engine replaces pistons of a conventional engine with a single triangular rotor spinning inside an oval-shaped chamber, which creates compression and expansion as the rotor turns. There are three combustion chambers in the Wankel, with a crankshaft between them.

To make the Skycar safe and available to the general public, it will be completely controlled by computers using Global Positioning System (GPS) satellites, which Moller calls a fly-by-wire system. In case of an accident, the vehicle will release a parachute and airbags, internally and externally, to cushion the impact of the crash.

MACRO Industries' SkyRider X2R will also use this fly-by-wire system to safely transport passengers to their desired destinations. Drivers will simply get in, turn on the power and enter the address or phone number of their destination. SkyRider will do the rest. MACRO said that the system will be almost fully automatic, but may allow some manual control. Commands will be entered just by telling the car what you want it to do.

According to their Web site, MACRO is shooting to have a working vehicle produced sometime in 2006. The company is planning to power the vehicle with an enhanced automobile engine to drive four-ducted fans. The unique feature of the SkyRider will be the company's patented rotary cartridge valve, which is expected to increase fuel efficiency and reduce emissions.

The CityHawk is similar to the Skycar and SkyRider in that it also takes off and lands vertically. However, there are some key differences. The CityHawk will be powered by fans that are driven by four internal combustion engines. Much like in the Skycar, this redundancy of engines will allow the vehicle to land even if one of the engines is lost. The CityHawk is about the size of a Chevy Surburban, and will have cruising speeds of 90 to 100 miles per hour (145 to 161 kph). CityHawk developers say that it could be used as an air taxi, for news gathering and for traffic control.

The mass availability of flying cars could be very exciting or very scary, depending on how you look at it. If proper safeguards are put in place, they could be the answer to our ever-worsening traffic jams. Flying cars that can travel at hundreds of miles per hour would not only cut that rush hour commute to a few minutes, but it would allow us to live hundreds of miles farther from work and still make it to the office faster than by road-bound cars today.

Wouldn't it be great to be able to pack a few bags, grab your friends and fly anywhere in the world in your own personal jet anytime you want? The folks behind start-up "Terrafugia" hope to make your dreams come true by 2009 or 2010. Well, sort of. Change the dream to 'friend' and imagine the flight plan being somewhat limited.

The Terrafugia team is currently working on a personal air vehicle (known as the "Transition") that pretty much looks like an SUV with retractable wings. The Transition won't be able to whisk you off on a non-stop flight to any destination, but you will be able to get as far as 500 miles in one "jump." And, amazingly, the designers hope it will do it on a single tank of premium unleaded gas. Oh, and don't worry about having to rent a car once you reach your getaway -- as hinted at in its name, the Transition gets decent mileage on the road, too! (Planned vehicle specs: In flight, the Transition will fly up to 120 miles per hour and get 30 mpg. On the highway, it will get 40 mpg and around town, it will get 30 mpg.)

A full-size prototype is planned, but for now the designers are working with a one-fifth scale model in the wind tunnel and relying on computer simulations for development.