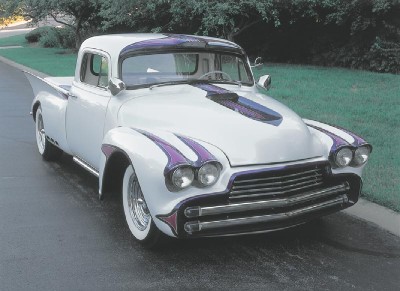 The Dream Truck was the collaborative vision of a group of custom designers, built on a 1950 Chevy pickup. See more custom car pictures.

The story of the Dream Truck, a custom Chevy pickup, is a mix of insight, good luck, and the persistent leadership of Spencer Murray. Murray, the first editor of Rod & Custom magazine, gathered together and focused on a single project an improbable array of the best craftsmen of the 1950s customizing art. Starting with his daily driver, a '50 Chevy pickup, Spence set out to create a wild custom whose development could be regularly depicted in the pages of Rod & Custom.

The construction of the Dream Truck was covered in dozens of articles, starting in the September 1953 R&C. The project progressed through most every custom technique in its five-year odyssey, inspiring a generation of custom fans.

The project started with custom modifications, performed by a who's who of customizers, on a factory-fresh 1954 Chevy truck cab. Sam Gates chopped the top 3-3/8 inches and sectioned the body 5-1/3 inches. Neil Emory and Clay Jensen of Valley Custom finished the chop and sectioning work, and hand-formed the beautiful dashboard. Curly Davis finished the dashboard, integrated it into the door design, and widened the rear window.

Construction of the Dream Truck began in 1953 with an interior featuring a hand-formed dashboard integrated into the door design.
Publications International, Ltd.

After Gene Winfield radiused the front-wheel cutouts and sectioned the hood, Barris Kustom added quad headlights, scoops to the roof and hood, and front and rear grille openings formed by molding together '54 Stude­baker front pans.

Bob Hirohata added the clear front and translucent red rear turn-signal lights. Later, Bob Metz formed the wild scratchbuilt canted fins. Each of these craftsmen proved integral in the development of the truck.

The Dream Truck was given several mechanical upgrades with the aim at making the truck perform as well as it looked. To lower the truck, the rear spring perches were relocated, and an airbag suspension was installed and hooked to a semi-elliptical front-spring setup.

Most importantly, the Dream Truck was the first vehicle to receive a documented small-block Chevy engine swap. The new-for-'55 V-8 would soon become a milestone engine in the rod and custom world.

As the project evolved, different versions and paint jobs emerged. First shown in gray primer with white scallops, the truck progressed to metallic lavender with Dean Jeffries-applied scallops, then to bright white with scallops, and ultimately to metallic lime gold with a fresh burgundy red scallop design. Each version was enjoyed by uncounted numbers of custom fans as Spence campaigned the truck at car shows across the United States.

This history might have been enough to cement the Dream Truck in custom car lore, but more was yet to come. In 1958, a tire blew on the pickup that was towing the Dream Truck, causing the iconic custom to flip end over end.

After the horribly damaged vehicle was trailered back to California, George Barris displayed it -- with the mangled bodywork -- at car shows. Soon thereafter, Spence parted it out and sold the banged up vehicle to a buyer who never fully paid for it.

The Dream Truck disappeared until the late 1970s, when, after a decade of searching, Bruce Glascock found its worn-out hulk in California. Bruce acquired it, and asked Spence to help him guide the restoration. After months of difficult work, the Dream Truck was returned to its white paint livery and placed on the Darryl Starbird show tour.

The Dream Truck was restored in the late 1970s and returned to its previous bright white paint glory.
Publications International, Ltd.

In 1986, Bruce sold the truck to custom car collector Kurt McCormick who rebuilt and modified the drivetrain and front suspension, then presented the truck again to the custom car world.

The Dream Truck has since been displayed at many venues across the United States, including a major cultural presentation at the Oakland Museum and, later, at Starbird's Rod & Custom Car Hall of Fame Museum in Afton, Oklahoma. Thanks to Bruce Glascock, Kurt McCormick, and Spence Murray, the combined effort of the 1950s' best customizers is well-preserved.