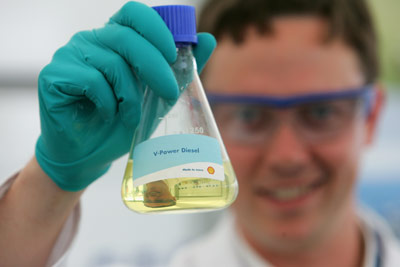 ­­­­Petroleum fuel starts off as crude oil that's naturally found in the Earth. When crude oil is processed at refineries, it can be separated into several different kinds of fuels, including gasoline, jet fuel, kerosene and, of course, diesel.

If you have ever compared diesel fuel and gasoline, you know that they are different. They certainly smell different. Diesel fuel is heavier and oilier. It evaporates much more slowly than gasoline -- its boiling point is actually higher than the boiling point of water. You will often hear diesel fuel referred to as "diesel oil" because it's so oily.

Diesel fuel evaporates more slowly because it is heavier. It contains more carbon atoms in longer chains than gasoline does (gasoline is typically C9H20, while diesel fuel is typically C14H30). It takes less refining to create diesel fuel, which is why it used to be cheaper than gasoline. Since 2004, however, demand for diesel has risen for several reasons, including increased industrialization and construction in China and the U.S. [source: Energy Information Administration].

Diesel fuel is used to power a wide variety of vehicles and operations. It of course fuels the diesel trucks you see lumbering down the highway, but it also helps move boats, school buses, city buses, trains, cranes, farming equipment and various emergency response vehicles and power generators. Think about how important diesel is to the economy -- without its high efficiency, both the construction industry and farming businesses would suffer immensely from investments in fuels with low power and efficiency. About 94 percent of freight -- whether it's shipped in trucks, trains or boats -- relies on diesel.

In terms of the environment, diesel has some pros and cons. The pros -- diesel emits very small amounts of carbon monoxide, hydrocarbons and carbon dioxide, emissions that lead to global warming. The cons -- high amounts of nitrogen compounds and particulate matter (soot) are released from burning diesel fuel, which lead to acid rain, smog and poor health conditions. On the next page we'll look at some recent improvements made in these areas.