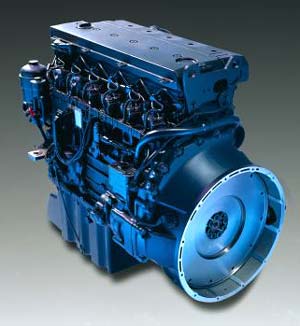 One big difference between a diesel engine and a gas engine is in the injection process. Most car engines use port injection or a carburetor. A port injection system injects fuel just prior to the intake stroke (outside the cylinder). A carburetor mixes air and fuel long before the air enters the cylinder. In a car engine, therefore, all of the fuel is loaded into the cylinder during the intake stroke and then compressed. The compression of the fuel/air mixture limits the compression ratio of the engine -- if it compresses the air too much, the fuel/air mixture spontaneously ignites and causes knocking. Because it causes excessive heat, knocking can damage the engine.

Diesel engines use direct fuel injection -- the diesel fuel is injected directly into the cylinder.

The injector on a diesel engine is its most complex component and has been the subject of a great deal of experimentation -- in any particular engine, it may be located in a variety of places. The injector has to be able to withstand the temperature and pressure inside the cylinder and still deliver the fuel in a fine mist. Getting the mist circulated in the cylinder so that it is evenly distributed is also a problem, so some diesel engines employ special induction valves, pre-combustion chambers or other devices to swirl the air in the combustion chamber or otherwise improve the ignition and combustion process.

Some diesel engines contain a glow plug. When a diesel engine is cold, the compression process may not raise the air to a high enough temperature to ignite the fuel. The glow plug is an electrically heated wire (think of the hot wires you see in a toaster) that heats the combustion chambers and raises the air temperature when the engine is cold so that the engine can start. According to Cley Brotherton, a Journeyman heavy equipment technician:

All functions in a modern engine are controlled by the ECM communicating with an elaborate set of sensors measuring everything from R.P.M. to engine coolant and oil temperatures and even engine position (i.e. T.D.C.). Glow plugs are rarely used today on larger engines. The ECM senses ambient air temperature and retards the timing of the engine in cold weather so the injector sprays the fuel at a later time. The air in the cylinder is compressed more, creating more heat, which aids in starting.

Smaller engines and engines that do not have such advanced computer control use glow plugs to solve the cold-starting problem.

Of course, mechanics aren't the only difference between diesel engines and gasoline engines. There's also the issue of the fuel itself.