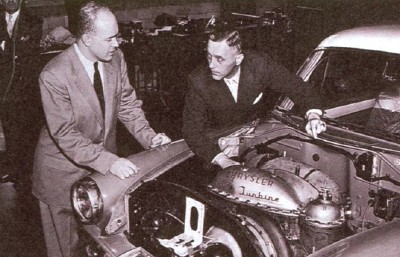 A 1954 Plymouth Belvedere hardtop was the testbed for the Chrysler CR1 gas turbine engine. Project engineer George Huebner Jr. is on the right.
©2007 Publications International, Ltd.

By 1954, the first of Chrysler's CR gas turbine engines designed for cars was ready. Dubbed "CR1" and rated at a modest 100 horsepower, it was installed in a stock-looking 1954 Plymouth Belvedere hardtop that ran successfully at the opening of Chrysler's new Chelsea, Michigan, proving grounds. A similar engine went into a 1955 Belvedere four-door.

Improvements followed thick and fast. A modified CR1 with more exotic metallurgy powered a 1956 Belvedere "Turbine Special" sedan on a cross-country run that year. It performed well except for returning only 13 miles per gallon, excessive even for those times.

Next came a more efficient CR2 with about 200 horsepower, aided by cheaper but sturdier alloys that better withstood heat and oxidation.

The Turbine Special, a 1956 Plymouth with a CR1 engine, got only 13 mpg on a cross-country run.
©2007 Publications International, Ltd.

This powered a second 1956 Plymouth sedan as well as a 1957-58 version before making its public debut in a 1959 Fury-based Turbine Special hardtop sedan. That car turned in a more creditable 18 mpg on a 1,200-mile demonstration run from Detroit to Princeton, New Jersey.

The third-generation CR2A was ready by 1960. Its two big advances were a pivoting fuel nozzle mechanism and first-stage turbine vanes that could assume one of three angles depending on throttle position.

Together, these provided a measure of engine braking (the lack of which was a serious drawback of turbine engines), plus stronger acceleration; they also greatly reduced the irritating "throttle lag" that had plagued earlier versions. Where the CR1 needed a full seven seconds to go from idle to full power output, the CR2A took only 1.5-2.0 seconds.

CR2As were initially installed in three different 1960 vehicles: a near-stock Plymouth Fury hardtop, a 2.5-ton Dodge truck, and the amazingly befinned TurboFlite, which wasn't shown until 1961.

The last was designed by Maury Baldwin, who later termed it the final "Virgil Exner" show car: "We incorporated a lot of interesting things in it. Entrance-wise, the whole cockpit above the beltline lifted to admit passengers. Mounted between the fins was a deceleration flap, such as used on racing cars. The headlights were retractable. The car was built by Ghia; we did a 3/8-scale model and then full-size drawings. It was probably one of the best engineered show cars we ever did."

To find out how these models led to the Turbine Car, keep reading on the next page.