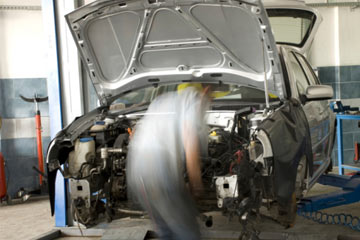 Most cars stolen by professionals are taken to illegal chop shops where they're dismantled and sold as parts.
iStockphoto/Thinkstock

Every 40 seconds, a car or truck is stolen in the United States, adding up to a total of just less than 800,000 stolen vehicles a year. In 2009, 258 of every 100,000 cars were stolen [source: Insurance Information Institute]. But while some of those cars are stolen by criminals for their own transportation, and others are stolen by teenagers looking for a joyride, many are lifted by professional thieves. Instead of dumping the cars when the ride is over, these pros take them to chop shops, illegal garages where mechanics dismantle cars and sell them for parts. It's difficult to determine how many stolen cars are taken by professional thieves. Recent estimates put the figure at around 25 percent [source: National Highway Traffic Safety Administration].

The professionalization of car theft began in the '70s, when organized crime syndicates began to take over the business of car theft from the amateurs. Car thefts reached epidemic levels during that decade. In 1978, for example, 1 million cars were stolen in the United States [source: U.S. Senate]. It was then that illegal chop shops began opening up across the country, eventually prompting Congressional hearings and a series of federal laws aimed at stopping the new trend. In 1970s New York City, the NYPD estimated that 55 percent of all cars stolen in the city ended up chopped for parts [source: U.S. Senate].

Car thefts have actually trended downward in the United States over the past three decades. In 2006, cars were stolen as often as every 26 seconds, but thefts were actually down 17 percent from 2008 to 2009 [source: Insurance Information Institute].

However, despite law enforcement efforts, chop shops are still alive and well in the United States, Canada, Latin America, Europe and Japan. In the United States, only 12.4 percent of stolen car cases are closed each year, and many of the cars that aren't found end up in professional car theft rings [source: Insurance Information Institute]. Of course, it's impossible to say how many of those missing vehicles end up chopped for parts. If the authorities knew what happened to them, more cases would be closed.

So what exactly is the purpose of a chop shop? In a nutshell they hide the identity of stolen cars and quickly turn them around and sell them for profit. Some are run independently, and some are part of larger criminal networks like gangs and the mafia. Read on to find out how these illegal chop shops can turn a stolen car into cold hard cash in a matter of a few hours.

How a Chop Shop Operates

Real chop shops aren't like the ones we see in the movies -- huge warehouses with rows of expensive sports cars and teams of mechanics sending sparks flying as they work. To keep working, chop shops need to be discrete and avoid detection by the authorities. Police do sometimes bust large chop shops, like one that was raided in Washington State in late 2010 that contained parts from 40 different cars inside [source: Sky Valley Chronicle]. But most shops operate out of small houses, residential garages or nondescript commercial spaces [source: U.S. Senate]. The goal is quick turnaround. Cars are taken in, taken apart and moved out within a few short hours.

Chop shops are often tied to organized crime syndicates [source: Statistics Canada]. Small individual shops are part of a larger network of thieves and illicit salvage yard operators. The thieves steal cars, often according to a list provided by the chop shop or the salvage yard [source: Onishi]. They may also bring cars not listed and try to fence them (make a quick, illegal exchange for cash) [source: Statistics Canada]. The chop shops will then dismantle the cars and deliver the parts to the salvage yard to be sold, though in some cases they will sell the parts themselves [source: U.S. Senate].

Chop shop mechanics can dismantle a car into its components in as little as one or two hours, with minimal training. Dismantling the car can be extremely profitable, since the price of an entire car's worth of replacement parts is usually much higher than the resale value of the car [source: McClearn]. The profit margin increases for older model years, since legitimately salvaged parts become more difficult to find as the cars become harder to find. Mostly, chop shops focus on selling body panels more than engine components [source: Pittsburgh Police].

So how's it done? Mechanics remove personal items and license plates from the car and destroy them. Next, they unbolt the front end of the car from the frame in one piece -- that includes the fender and the hood. They then cut out the windshield and unbolt the doors and seats (which are held on by as few as four bolts on many cars). Using an acetylene torch, they cut the roof supports at the front, and then cut through the floor under the steering wheel. The dash section (or the "cowl") is especially valuable for the airbags, which are usually not left intact in wrecked cars. The rear section of the car, with the roof attached, is left whole [source: U.S. Senate].

What Else Ends Up Chopped?

Stolen cars and trucks may be big business, but chop shops have also been known to steal more unconventional vehicles. Tractor trailer parts are extremely valuable, since they have fewer identifying registration numbers than autos. The same is true for construction equipment [source: U.S. Senate]. Everything from motorcycles and ATVs to boats end up in chop shops [source: Davis and Susko]. 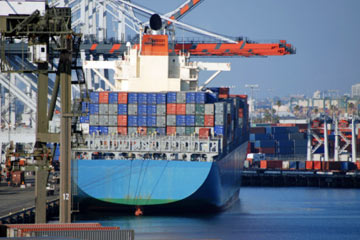