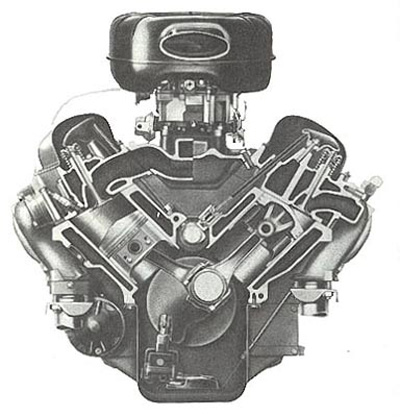 The 1958 version of the Turbo-Thrust 348 V-8. Though it started as a truck engine, it formed the basis of the legendary 409, introduced in mid-1961.
Publications International, Ltd.

The first big-block Chevy V-8 was introduced in 1958 as an optional alternative to the small-block engine. It was not related in any way to its classic predecessor, being new from the ground up. Neither has it been regarded as one of the highlights in Chevy engine history. Although good in its way, it was simply outclassed by the "fuelie" 283 before it and by the 409 which took over at the head of the line for 1962. But the 348 was the largest and most powerful Chevrolet engine you could buy in 1958-61, and deserves at least a brief mention.

As the 265/283 was first known as "Turbo-Fire," the 348 was dubbed "Turbo-Thrust," but the factory knew it better as the "type W." This designation stemmed from the characteristic shape on the outside edge of the rocker covers, something that was much less unique as we moved into the 60s. The "W" was intended for the new generation of a much larger and heavier Chevrolets born in 1958 that blossomed into the full-blown 119-inch-wheelbase cruisers of 1959.

With a bore and a stroke of 4.125 x 3.25 inches and 9.5:1 compression ratio, the 348 developed 250 bhp at 4000 rpm and 355 pounds-feet of torque at 2800 rpm. Combustion chambers were cylindrical wedges formed by flat-bottom heads that rested against the block faces at a 16 degree angle. The cast-aluminum pistons were machined with 16-degree dual-sloping upper surfaces. Hydraulic valve lifters were used, as they were in the small-block V-8s (except fuel injected units). "Because of the lack of restrictions to passage of the fuel/air mixture in the heads and because half of the piston is closer to the head than the other half, turbulence is tremendous and volumetric efficiency should be excellent," observed Motor Trend. The "W" came standard with dual exhausts and four-barrel carburetor, but was not offered with fuel injection - something Chevy had had problems with, and was generally encouraging only for Corvettes.

The 348's highest stage of development appeared for 1960 - two four-barrel carburetors good for a rated 355 horsepower. It continued in this form for the 1961 model year before disappearing in favor of the 409.

The 348 should be remembered not as a mighty powerhouse, but as a smooth and reliable big-block for the new, larger Impala. Its 10-second 0-60 mph capability was about the norm for 1958 - hardly the kick-in-the-back acceleration provided by the FI or dual-quad 283s. Significantly, Chevrolet offered very little hop-up equipment for the "W" for the simple reason that it never was really intended as a high-performance mill. In 1958, of course, Chevrolet was outwardly abiding by the Automobile Manufacturers Association (AMA) decision to "discourage" (or at least not advertise) racing, and the 348 fit right in with the Division's public posture. Performance enthusiasts would have to be content with the hotter versions of the 283 through 1961. Happily, these powered some of the most memorable of the "performance" Chevys.