You Can't Control Me! 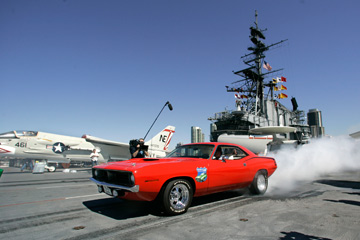 A Chevrolet Camaro burns its tires alongside a Navy fighter jet during a demonstration on the flight deck of the USS Midway in San Diego, Calif.
AP Photo/Lenny Ignelzi

There are still some people who simply don't like cars telling them what to do. These drivers want to feel the road, control the brakes, chirp the tires and drive down the road listening to Boston's "Greatest Hits" album. Well, then you should know that track number six is "Cool the Engines," dude, so take a chill pill. But the dude does make a good point -- sometimes you do want to turn off traction control. In that case, it's usually as easy as pushing a button on the console, often somewhere near your left knee.

Why would you turn off something so helpful? Well, it's actually less helpful to have traction control when you've got a wheel stuck deep in snow or mud. In that case, you want the tire to spin, sending snow or mud flying out behind the car, until the tire finds some hard ground to grab onto. In that same situation, rocking the vehicle back and forth a bit can help you get unstuck, and traction control won't let you rock. Just ask that Boston-loving driver.

Some cars have a terrible reputation for this. The traction control system in a Toyota Prius is so sensitive that it'll brake hard in snow rather than fluttering the brakes to find traction. It allows no wheel spin and even shuts down power to the wheels. Consumer Affairs even called it "dangerous" [source: Cars Direct]. There are instructions on the Internet for turning the Prius traction control system off; that is, if you want to live on that edge. If you don't drive a Prius in blizzards very often, however, it's probably better to leave it on nearly all the time.

Speaking of people who have a love-hate relationship with traction control, let's talk about Formula One racing. When traction control was invented by Bosch in the 1980s, F1 was all over it. And then the electronics and telemetry got out of hand in the 1990s (look up Nigel Mansell and be amazed at his car) and Formula 1 banned traction control. But traction control uses so many of the same systems and sensors as other legal devices require that F1 officials simply couldn't tell who was cheating by using traction control. So in 2002, the gods of F1 allowed it once again. But the interval was short lived. Traction control was also part of launch control systems which F1 banned in 2004, and traction control itself eventually followed -- yet again -- by being banned for the second (and so far) final time in 2008.

I live in the Pacific Northwest, where the snow mostly stays in the mountains. The valleys get a lot of rain, but the roads are sloped and we have pretty good drainage in my town. But the leaves! The wet leaves every fall engage my traction control system every year. The gutters fill with leaves and block the grates in the street, leaving piles of sopping wet leaves floating in inches of water. If I dare to park at the curb, I'm guaranteed to spin the wheels a bit when I pull away. It's funny that it took me awhile to learn to live in harmony with ABS -- I wanted to pump my brakes so badly -- but I came to rely on traction control pretty quickly. Easy on the gas pedal, wait for the system to kick in and the gutter-side tires to catch and then ease on out of the parking space. Fall is really the only season that my traction control system is ever used.